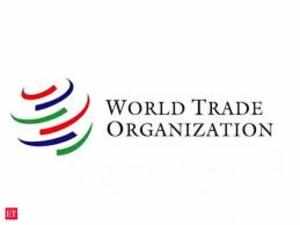 The peace clause protects a developing country’s food procurement programmes against action from WTO members in case subsidy ceilings are breached. High subsidies are seen to be distorting global trade.NEW DELHI: India has invoked the peace clause of the World Trade Organization for exceeding the ceiling on support it can offer farmers for rice for the marketing year 2018-2019, marking the first time any country has taken recourse to this safeguard.

India informed the WTO that the value of its rice production was $43.67 billion in 2018-19 and that it gave subsidies worth $5 billion. The limit is pegged at 10% of the value of food production in the case of India and other developing countries.

The peace clause protects a developing country’s food procurement programmes against action from WTO members in case subsidy ceilings are breached. High subsidies are seen to be distorting global trade. 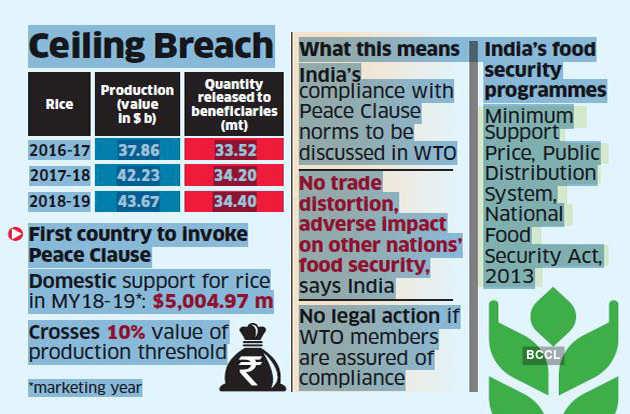 “India’s breach of commitment for rice, a traditional staple food crop… arises from support provided in pursuance of public stockholding programmes for food security purposes which were in existence as of the date of the Bali Ministerial Decision on Public Stockholding for Food Security Purposes,” India told the WTO.

In its notification to the organisation, New Delhi said that under its public stockholding programmes for food security purposes, rice, wheat, coarse cereals and pulses, among others, are acquired and released in order to meet the domestic food security needs of India’s poor and vulnerable population, and “not to impede commercial trade or food security of others.” This is the first time any country has invoked the peace clause.

“It is a test case to see if in such circumstances, like the ongoing Covid-19 pandemic, the WTO members give primacy to the developing countries’ food security or if developed countries will seek market access,” said an official.

India is confident that it has met the conditions to be able to use the peace clause – and not distort trade or adversely affect the food security of other members – and that no country will raise a dispute. The issue will be discussed in the Committee on Agriculture of the WTO.

It told the WTO that the main objectives of the food security programmes are to ensure minimum support prices for farmers, stability in food grain prices and their equitable distribution at affordable rates to the marginalised and vulnerable sections of society throughout the year.