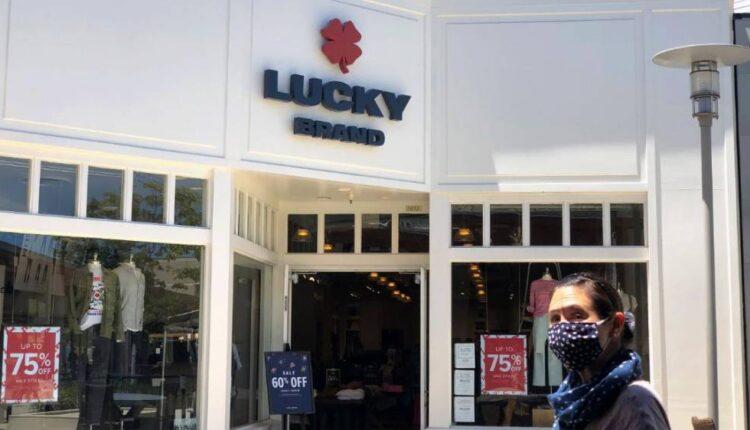 New York (CNN Business)Coronavirus, massive amounts of debt and a shift in shopping habits created a lethal cocktail of bankruptcies and store closures in July.

So far this year, 21 private and public retailers have filed for Chapter 11 according to BankruptcyData.com. That’s more than double the number that filed for the same time period last year. In total, 20 retailers filed for bankruptcy protection in 2019. “A retail sector already in upheaval in the face of changing consumer habits in 2019 is now additionally faced with a massive demand shock for which there is no cure,” said James Hammond, the CEO of New Generation Research.

“Storied names in the industry, some operating for over 100 years, like Brooks Brothers, have fallen,” he added. “Even the strong can’t survive. This is far from over.” (New Generation Research runs BankruptcyData.com.)In July, well-known mall staples that filed for Chapter 11 included Lucky Brand, Brooks Brothers, Muji and Sur La Table. All of those stores, and others, announced significant store reductions amounting to more than 1,000 closures in the list below. Read MoreHere are some of the brands that announced closures and bankruptcies in July:

The name of this huge franchisee may not sound familiar, but what it operates certainly does: 1,200 Pizza Hut and 400 Wendy’s restaurants throughout the US.NPC International kicked off July’s string of bankruptcies with its own, blaming its collapse on coronavirus-related shutdowns, a debt burden of nearly $1 billion as well as rising labor and food costs. Its restaurants will continue to operate and it employs nearly 40,000 people in 27 US states, according to its website.The company will use Chapter 11 to “evaluate and optimize our restaurant portfolio so that we are best positioned to meet the needs of consumers across the country.” 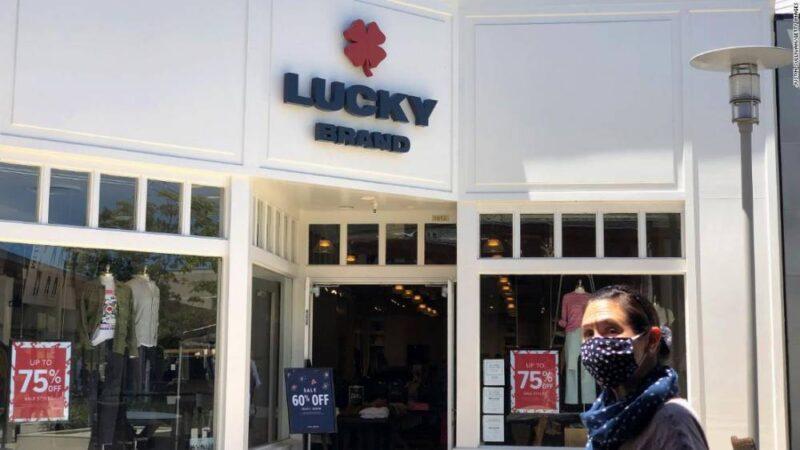 A Lucky Brand store in Northern California.The once-trendy denim company filed for bankruptcy on July 3, explaining in a press release that the pandemic has “severely impacted sales across all channels.” Lucky Brand will immediately close 13 of its roughly 200 stores in North America, which are mostly in malls. However, its online store and re-opened locations will continue to operate normally.The plan through the Chapter 11 process is to sell itself to SPARC Group, the owner of Nautica and Aéropostale.

The 200-year-old menswear retailer that has dressed 40 US presidents filed for bankruptcy on July 8. The privately held company had been struggling as business attire grew more casual in recent years and the transition to working-from-home because of the pandemic. Brooks Brothers has been evaluating various strategic options, including a potential sale. But it has struggled to find a buyer. A company spokesperson told CNN Business that it expects to “complete the sale process within the next few months.” It’s also in the process of permanently closing 20% of its 250 US stores. 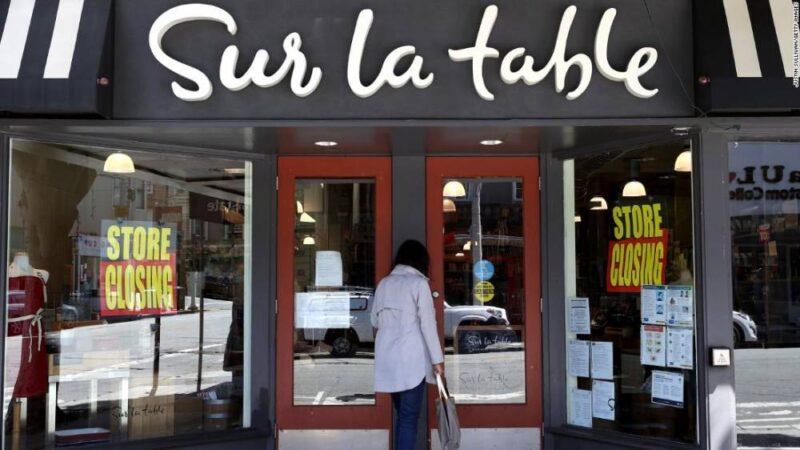 A Sur La Table store in San Francisco, California.The nearly 50-year-old purveyor of upscale kitchenware and cooking classes filed for bankruptcy on July 8. Despite people increasingly cooking at home and needing kitchen supplies, the retailer was hurt by the temporary store closures sparked by the pandemic. To better “thrive in a post Covid-19 retail environment,” the company is closing roughly half of its 120 US stores and looking for a buyer.

The trendy Japanese retailer that sells minimalist decor, stationery and clothing, filed for bankruptcy on July 9. Muji CEO Satoshi Okazaki said the company has “felt the devastating effects of the Covid-19 pandemic on in-store retail” and is closing a “small number” of its US stores. Muji plans to focus its efforts on online sales. The company said in its statement that the bankruptcy process will “ensure the future health, growth, and viability of the company. Muji is committed to serving its customers in the market and providing a high quality of product and experience into the future.”

The owner of women’s retailer New York & Co. filed on July 13 — just weeks after warning its future was in “substantial doubt.” RTW Retailwinds, which has nearly 400 stores and 5,000 employees, said it “expects to close a significant portion, if not all, of its brick-and-mortar stores” after liquidation sales are complete.Like others, it blamed its collapse on the “challenging retail environment coupled with the impact of the coronavirus pandemic” that has caused “significant financial distress.” It’s looking to sell its online operations and the intellectual property of the century-old business. 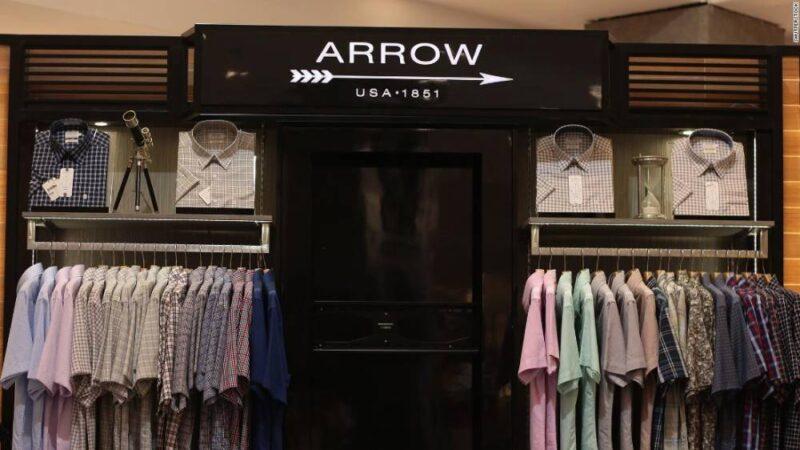 Arrow is menswear brand owned by PVH Corp.PVH Corp. (PVH), which owns Calvin Klein and Tommy Hilfiger, didn’t file for bankruptcy but announced substantial closures and layoffs of its Heritage Brands unit on July 14.Van Heusen and Izod Golf stores are part of Heritage and are staples across US outlet malls. In total, it’s closing the entirety of its 162 store footprint and PVH is laying off 12% of its total workforce, which amounts to roughly 450 jobs. Heritage also owns women’s brands Olga and Warner’s as well as men’s casual outfitter Arrow. Those brands won’t disappear, and will still be sold in department stores and warehouse clubs.

OK, so technically Tailored (TLRD) hasn’t filed for bankruptcy. Yet. Despite strong rumblings of a bankruptcy filing. Instead, on July 21 it announced store closures and deep cuts to its corporate workforce.The owner of suit sellers Men’s Wearhouse, Jos. A. Bank, and K&G identified 500 stores for closures and said it’s cutting 20% of its corporate positions in hopes of strengthening its “financial position and enable it to compete more effectively in the challenging retail environment,” according to a release.”Unfortunately, due to the Covid-19 pandemic and its significant impact on our business, further actions are needed to help us strengthen our financial position so we can navigate our current realities,” said CEO Dinesh Lathi.The company has around 1,500 stores in the United States, with about half operating under the Men’s Wearhouse name. 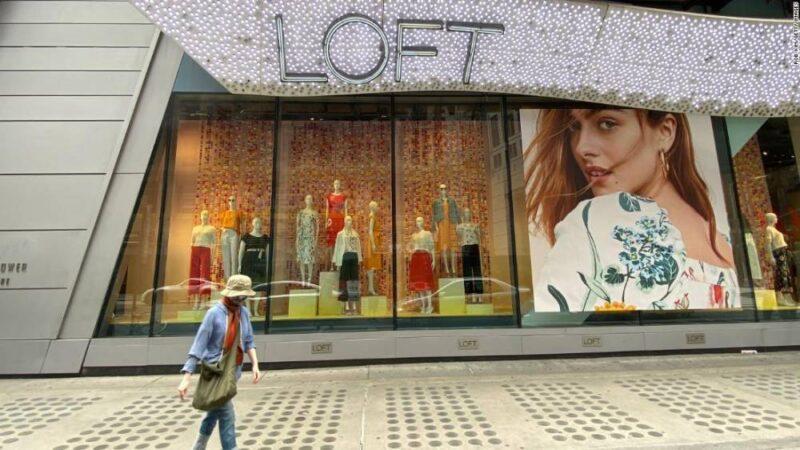 An Ann Taylor in New York City. The owner of Ann Taylor, LOFT, Lane Bryant and other women’s clothng stores filed for bankruptcy Thursday. Ascena was in deep financial trouble even prior to the Covid-19 pandemic, reporting a positive operating profit in only one year of the last five and has reported operating losses of $2.4 billion since the summer of 2014.Ascena is closing all of its roughly 300 Catherines stores, a significant but undisclosed [number of Justice stores and a smaller number of Ann Taylor, LOFT, Lane Bryant and Lou & Grey locations. As of February 1, it had 2,764 stores spread among its various brands — a decrease of 600 since the beginning of August.

“The meaningful progress we have made driving sustainable growth, improving our operating margins and strengthening our financial foundation has been severely disrupted by the Covid-19 pandemic,” said Carrie Teffner, interim executive chair of Ascena, in a statement.–CNN Business’ Chris Isidore contributed to this report.