Swaminathan Aiyar calls for a bigger Covid package on the lines of the US, says govt shouldn’t worry about fiscal deficit to deal with once-in-a-century crisis 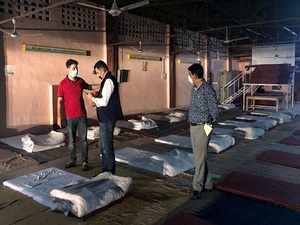 Swmay hailed the government’s move but said that the scale of the package has to be bigger.India should drop its fiscal deficit fascination and go all out to help the poor and the needy bearing the brunt of the coronavirus crisis, feels Swaminathan Aiyar.

In an interview to ET NOW, Swami said that the government should shed inhibitions about a rising fiscal deficit and let the Reserve Bank of India monetise it through printing of currency notes even if it were to be inflationary.

“I would say just print money. In other words, the government should have extra borrowing, financed entirely by the Reserve Bank of India printing money. This will be a once and for all a huge explosion of the fiscal deficit, so be it,” Swami said in the interview.

The government had revised its fiscal deficit target upwards to 3.8 per cent from 3.3 per cent for the current fiscal year. It had resorted to a 50 basis point easing using the escape clause under the FRBM Act. The Reserve Bank of India, in February, had refused to monetise government’s fiscal deficit.

Terming the crisis a once-in-a-century event, Swami cited the example of the United States and its President Trump who just signed into law a $2.2 trillion package for the economy to fight the Covid-19 crisis.

“Americans have thrown away financial orthodoxy and they do not have a socialist president by any means. Mr Trump is a man who has been expressing all kinds of skepticism, in fact, peeved about the coronavirus. Even in that country, they have gone ahead with a relief package, which is 10 per cent of GDP. Why are we not anywhere near that?” Swami asked.

Finance minister Nirmala Sitharaman, on Thursday, unveiled a Rs 1.7 lakh crore relief package for those who have been the worst-hit due to a 21-day lockdown announced to tackle the coronavirus pandemic.

On Friday, the Reserve Bank of India also came forward and slashed the repo rate by 75 basis points. It cut the reverse repo by 90 basis points and introduced LTROs of up to Rs one lakh crore along with increasing the proportion of SLR to 3 per cent from 2 per cent earlier to borrow under the MSF, thereby opening up multiple channels of liquidity to the banks other financial institutions. It also announced a moratorium on payment of EMIs for term loans for up to three months.

Swami hailed the government’s move and the direction in which it is going but said that the scale of the package has to be bigger.

“What are we doing on Jan Dhan accounts? Rs 500 per family per month. It is pathetic. It is so small. On every single thing, I would say double it or triple it,” Swami said.

“You are dealing with an extraordinary once-in-a-century event. So let us have high fiscal deficit once in a century financed entirely by RBI and let us not worry about the inflationary consequences, or what foreigners say about it. We need to respond in not only in the right direction but on a much bigger scale,” Swami added.