View: The finance minister’s Covid-19 relief package is helpful, but there are gaping holes in it 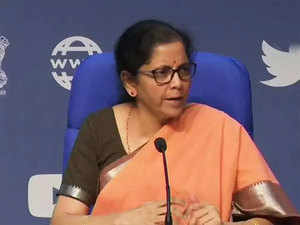 The relief package announced by Finance Minister Nirmala Sitharaman on Thursday, Pradhan Mantri Garib Kalyan Package (PMGKP), is a step in the right direction. But this package is more modest than it sounds.

Even as the novel coronavirus continues to spread, a humanitarian crisis is looming over India. Just think about, say, landless agricultural labourers — there are more than 14 crore of them (
bit.ly/2UEpsxw) — who live in the shadow of hunger at the best of times. How are they supposed to feed themselves and their families for 21 days, possibly much longer, without any work opportunities? Rickshaw-pullers, construction workers, migrant labourers and many other groups are also at risk. Some are already on the brink of starvation.

The relief package announced by Finance Minister Nirmala Sitharaman on Thursday, Pradhan Mantri Garib Kalyan Package (PMGKP), is a step in the right direction. But this package is more modest than it sounds. Indeed, the budget has been padded. For instance, by including Rs16,000 crore of pre-committed Pradhan Mantri Kisan Samman Nidhi (PM-KISAN) expenditure, and Rs5,600 crore for Mahatma Gandhi National Rural Employment Guarantee Act (MNREGA) scheme wage increases that had already been notified by the rural development ministry on March 23 (
bit.ly/39l17SI).

The release of excess foodgrain stocks is billed at so-called economic cost, when in fact, their opportunity cost is much lower. (This is an old accounting anomaly for which the FM is not responsible.) And the funds being sought from construction workers’ welfare funds don’t really belong to the Union government. If we focus on novel relief measures funded by the Centre, the budget is likely to be closer to Rs1 lakh crore than Rs1.7 lakh crore.

The relief package rightly builds on food rations, as well as cash transfers. The food-related measures are largely welcome, including the doubling of foodgrain rations for an initial period of three months, and the addition of pulses to the public distribution system (PDS). Many poor people, however, are still excluded from the PDS — all the more so as GoI is still using 2011 population figures to calculate state-wise PDS coverage under the National Food Security Act. Using projected 2020 population figures, instead of 2011 figures, would make it possible for state governments to issue a good number of new ration cards. Even if this happens, it will remain important to supplement food rations with cash transfers.

The PMGKP’s framework for cash transfers, however, is far from perfect. First, social security pensions for the elderly, widows and the differently abled have received short shrift once again. GoI’s contribution to social security pensions has stagnated at a measly Rs200 per month since 2006, despite repeated appeals for more. It should have been raised to Rs1,000 per month at least, on a permanent basis. Instead, pensioners are getting a meagre one-off grant of Rs1,000, at a cost of just Rs3,000 crore.

Second, the case for using women’s Pradhan Mantri Jan Dhan Yojana (PMJDY) accounts as the main destination for emergency cash transfers (worth Rs31,000 crore) is not clear. The list of MNREGA job cards would probably be a better choice. That list consists mainly of poor households, and is fairly comprehensive. The PMJDY list includes many middle-class individuals, and excludes many poor people.

PMJDY accounts were opened en masse in a tearing hurry, and many of them are now suspended, or seeded with wrong Aadhaar numbers, or unknown to the account holder, or stashed with black money. The job-cards list is more transparent, reliable, well-tested and pro-poor than the PMJDY one. Also, it is a natural complement to social security pensions, since pensioners are mostly out of the workforce. Its main limitation is that it is a rural list — if it is used, a different list (PMJDY or other) would have to be used in urban areas.

Third, the cash-transfer amounts are small. The PMGKP allocation of Rs31,000 crore for transfers to PMJDY accounts covers a monthly allowance of Rs500 per month for about 20 crore recipients, for an initial period of three months. It is impossible for a family of average size to survive on Rs500 a month.

Whether it is food or cash, the disbursement system will be a huge challenge (
bit.ly/2UmyFeL). With adequate resources, however, this trio — PDS, social security pensions and other cash transfers — can go a long way in building a safety net. But some people are bound to fall through the cracks. To avoid a tragedy, the relief system needs a fourth leg — emergency lines that can be accessed anywhere by anyone who is at risk of hunger.

There is some experience with emergency lines. The ‘KBK districts — Kalahandi, Bolangir and Koraput — of Odisha used to have feeding centres for destitute persons in rural areas, until 2015 when GoI pulled the plug on this valuable scheme. In Jharkhand, gram panchayats (GPs) have an emergency fund of Rs10,000 to help anyone who is at risk of starvation. In Rajasthan, GPs used to have two sacks of grain for the same purpose. Many states have community kitchens where anyone can get a simple, nutritious meal at a nominal price.

These arrangements are just a fraction of what is required today, but they show the way. Building on these experiences, effective emergency lines can be put in place. State governments are best placed to do this (some are on the job). But the central government must provide resources, starting with foodgrain — the godowns are overflowing. Support for emergency lines is a gaping hole in the finance minister’s relief package.

Emergency lines have to be put in place <right away> — within a few days, not a few weeks. Horrendous stories have already started pouring in of people going hungry, notably among migrant workers who are marooned all over the place. This is not the time to ask for their ration card or Aadhaar number — they must receive immediate, unconditional public assistance.

All this is about income support. Needless to say, much else (
bit.ly/2WReNSH) needs to be done by way of humanitarian relief, including effective health services and nutrition programmes for children (largely discontinued today as anganwadis and schools are closed). As and when the situation improves, MNREGA will also become important again, both for immediate relief and for economic reconstruction. The government’s action plan must urgently move beyond the limited measures initiated this week.

coronavirus: Covid-19: Centre intervenes to resume mandis across the country