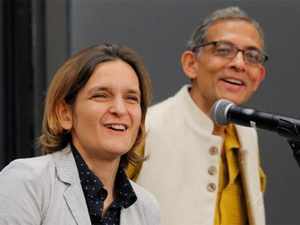 The duo suggest ways to fight the coronavirus situation in the country once the lockdown is over.

In an article published in The Indian Express, the duo said that the government should make use of the JAM trinity (Jan Dhan, Aadhaar and Mobile) to directly transfer the benefits into the accounts of people along with an electronic receipt.

In order to keep people at home so that they don’t step out in search of livelihoods, it is important that the amounts that are transferred are much larger.

“Be much, much bolder with the social transfers schemes. Without that, the demand crisis will snowball into an economic avalanche, and people will have no choice but to defy orders,” the duo said in the article.

The government has announced a Rs 1.7 lakh relief package for alleviating the economic distress caused by the lockdown that was announced for a period of 21 days starting March 25 by Prime Minister Narendra Modi to contain the coronavirus pandemic in the country.

Duflo and Banerjee said that the 21-day lockout will help in flattening the curve but pondered over life after the restrictions are lifted.

They underscored the fact that containing the spread of the disease will be very difficult once it reaches urban slums since social distancing is hard to observe in such places.

Since the lockout was ordered after the coronavirus infected a number of people in the country, it is likely that the number of cases could surge after the restrictions are lifted unless it is completely eradicated in these 21 days which is highly unlikely.

They also paint the scenario in which unknowing carriers could end up infecting those who are not directly related to them. In that case contact tracing will be difficult to carry out.

To fight such a situation, the duo suggest ramping up channels of reporting of the infection through ASHAs or a hotline, making at least each person aware of the symptoms of the virus, creation of mobile teams comprising doctors, nurses duly equipped with testing kits and other medical devices that are needed during an emergency.

Tackling the inevitable: The need for new economic ideas in the time of coronavirus