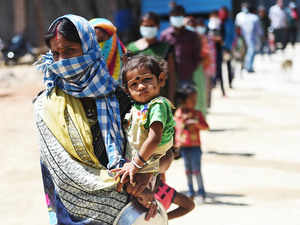 The government on Sunday notified the empowered group set up for coordination with private sector, NGOs and international organisations for COVID-19 related response activities.

“Empowered group has been constituted to address the issues pertaining to identification of problems, effective solutions and formulation of plans,” NITI Aayog said in a statement.

The empowered group led by Amitabh Kant, CEO of Niti Aayog, has held several rounds of meeting with the UN agencies, the World Bank, the Asian Development Bank, the civil society organisations and development partners and industry associations including CII, FICCI, ASSOCHAM, NASSCOM.

According to the Aayog, six meetings have been conducted since March 30 with various stakeholders about their contribution to the response, their plans for the coming weeks, and the issues they are facing, and their expectations from the government.

“All three groups have proactively pointed out the areas where they need support which the government is following up,” it said.

“Theyhave also been put in touch with other empowered groups for faster and more effective response and coordination,” it added.

As per the statement, the empowered group has shared with all stakeholders the government’s response so far, procurement of PPEs and ventilators, role of MEA, communication to CSs of all states, letter to 92,000 CSOs, putting the stakeholders in touch with each other, immediate solutions to the bottlenecks being faced by private sector in coordinating response.

Further, synergies have been created by linking the specific issues raised by connecting the industry to other Empowered Groups dealing with procurement, logistics and several other empowered groups, it said.