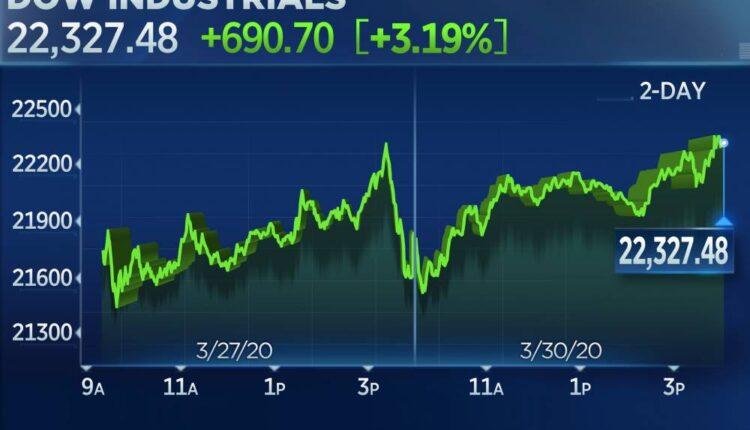 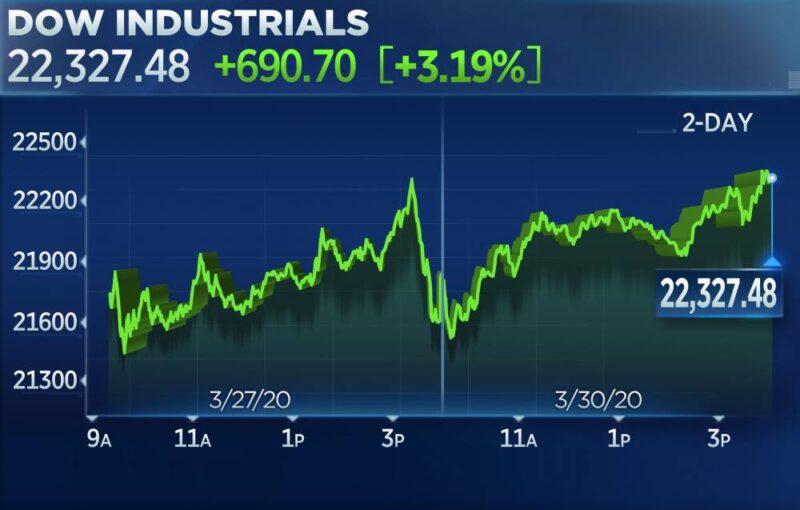 Stocks rose on Monday, building on a strong rally from last week as the U.S. extended measures to contain the coronavirus outbreak.

The Dow is now up 20% from its coronavirus sell-off low reached on Monday while the S&P 500 has risen more than 17% from those levels. The Nasdaq has bounced more than 13%.

"Right now, risk assets are pricing in a V-shape recovery," said Dave Albrycht, chief investment officer at Newfleet Asset Management. "Now, do I believe that's going to happen? I think that's highly dependent on whether they come up with some type of vaccine, how long does this go on for and whether people start going back to work once this peaks."

President Donald Trump said at a news conference Sunday the national social distancing guidelines have been extended to April 30, adding the death rate from the virus would peak in two weeks. These measures, while they may cause a sharp economic disruption in the near term, are seen by some investors as preventing long-term damage to the economy.

Sentiment was also lifted after Johnson & Johnson said it identified a lead vaccine candidate for the coronavirus. The company noted that human testing on the potential vaccine will begin in September. J&J shares climbed 8%. Italy also reported its lowest number of new cases in almost two weeks.

The sharp gains last week were sparked in part by the prospect of massive fiscal and monetary stimulus. President Donald Trump signed into law Friday a $2 trillion stimulus package that includes direct payments to curb the economic blow from the outbreak. The Federal Reserve also launched a series of measures to sustain the economy, including an open-ended asset-purchase program.

"Bulls staged an epic comeback," said Ken Berman, strategist at Gorilla Trades. "Despite the rally … the uncertainty regarding the length of the necessary, but economically damaging global lockdowns continues to weigh on risk assets."

"The technical picture continues to be bearish across the board, despite the mid-week surge in stocks, with all of the key trend indicators still pointing lower," said Berman, noting the major averages are still below their respective moving-day averages even after last week's strong gains.

Coronavirus cases around the world are still climbing, adding to the uncertainty over when lockdown and quarantine measures will be removed and the economy can return to normal.

Data compiled by Johns Hopkins University shows more than 713,000 coronavirus cases have been confirmed globally. The U.S. overtook Italy and China last week as the country with the most cases with over 136,000. Nearly half of all U.S. cases come from New York, where more than 59,000 people have been infected.

"Equity markets are overextended, but face a bumpy period of even grimmer virus news and poor economic statistics in the next 1-2 months," strategists at MRB Partners wrote in a note. "The world is now entering a third phase, the first being the shock of an out-of-control virus spreading around the globe, then the massive policy response, and now the economic fallout phase has arrived and will test investors' very fragile confidence."

Investors got a glimpse of the virus' economic impact last week. On Thursday, the Labor Department reported a record 3.28 million workers filed for unemployment benefits the week of March 20. That number easily topped the previous record of 695,000 set in 1982. On Monday, the Dallas Fed said its manufacturing activity index came in at -70 for March, far worse than a -10 estimate.

To be sure, the market has also flashed some signals of a potential bottom. The confidence spread between the so-called smart money — large institutions — and dumb money, retail investors, sits squarely in positive territory after dropping to extremely low levels. Meanwhile, insider buying reached an 11-year high. Data from Morning Consult showed U.S. consumer sentiment has started to stabilize.

"We have argued that given the speed of the fall there will have to be relief rallies, but that they are likely to end up being faded," wrote Mislav Matejka, a JPMorgan equity strategist, citing in a note a spiral between job losses, falling demand and declining earnings. "Ultimately, this bounce might prove tactical, too."

Op-Ed: Getting inspiration from the Greatest Generation’s economic hardship and shared sacrifice