lockdown: View: For the return of the native, en masse 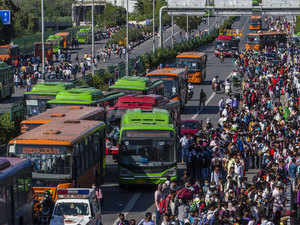 WorldIndiaConfirmed3,374Deaths77Confirmed1,197,405Deaths64,606If the migrant workers who fled India’s major centres of economic activity, after being locked down without any provision of food or the means to pay rent, do not return in a hurry, can India’s economy recover? Can farms complete the Rabi harvest and commence Kharif sowing in northwest India, without these toilers? Can the industrial hubs of Gurgaon-Manesar, Coimbatore, Tirupur, Surat, Noida, Pune hum again with their enriching, jobs-giving, income-generating, taxpaying activity?

How to bring the migrant workers back? They have been treated most shabbily. Left to fend for themselves by their employers, with a few discerning exceptions, with no work and, therefore, no wages, without the money to pay for food, facing eviction by their landlords when they fail to pay rent and with no sign of tangible relief from the government, a relief package of Rs 1,70,000 crore an abstract number whose zeroes float like so many balloons far above, they decided to go back to their villages.

The Indian village has many things going against it, but it also serves as India’s most effective, widespread social safety net. It offers absorption into an underemployed workforce, which might be dirt-poor but can subsist; it hosts a kinship network that will not allow anyone to starve. The Indian village offers survival, even if at the level of the barest of bare necessities.

En route to this refuge, many groups of migrant workers have been halted, sprayed with bleach, made to do punitive calisthenics on the public road and corralled into camps. Some have managed to trudge home. Once the lockout is lifted, those whose flight to safety had been interrupted would resume their journey home. Those who had reached home would try to plant some crop in whatever land they had left to their kin to tend.

How can they be persuaded to come back? A
story by Dinesh Narayanan in the Economic Times quoted population study expert Irudayarajan speculate that migrants could reassess the viability of travelling very far from home, following their recent experience of being left stranded.

If the migrants do not return, both they and the economic activity they have deserted would be worse off in the short run. In the medium term, more intense mechanisation and higher wages that redeploy local manpower might take care of the missing workers. Right now, we have to worry about the near term.

The workers have to be persuaded to come back.

Begin by treating them like citizens, rather than a blight on civilisation. Transfer cash to them. Use the technology that mobile phone networks have to create a payment account for every subscriber. As it is, every prepaid Sim card is like a prepaid cash card. Load it up with money, let them encash it at local shops or bank mitras, banking correspondents. This is necessary, even in the case of migrant workers who are being sheltered and fed in camps. They must feel the system cares for them. This would give them the sense of security needed to respond positively to a summon to return to work.

Arrange transport for the migrants, both to go home and to return from their villages back to their place of work. Train them to keep a physical distance from others and distribute disposable masks, one a day per worker. Producing masks would give some badly needed work to some Medium, Small and Micro Enterprises and rationing their distribution, instead of making them freely available in bulk, would prevent some bright spark dreaming up a scheme to corner the lot and export a consignment to the US.

The workers would expect a pandemic hazard premium to their wages. Give PM Kisan a bonus shot of upfront payment to enable farmers to pay this premium. Give MSMEs interest subvention on loans to tide over the period of revenue-less lockdown and pay their workers a bonus.

Initiate a massive scheme of public housing in all urban centres to bring rents down for migrant workers. Making every citizen a homeowner is a ridiculous notion in a country where nine million people migrate every year. What is urgently required is a plentiful supply of rental housing, built in a fashion that prevents ghettoization, allows access by law enforcement agencies, firefighters and health workers. Building such housing would create the kind of investment the economy needs, for growth to pick up.

All this must be prefaced by a multiparty initiative to make migrant workers feel they are human beings entitled to dignity. That means educating the public and, in particular, those who man the administrative machinery.

3M: We’ll make more N95 masks for the US but we need to keep exporting them