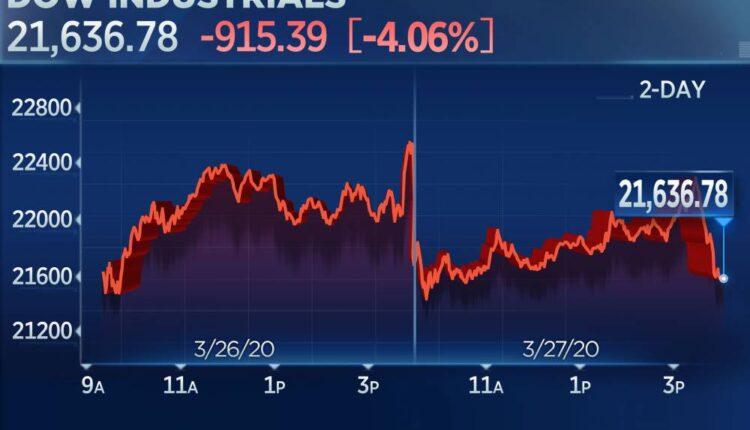 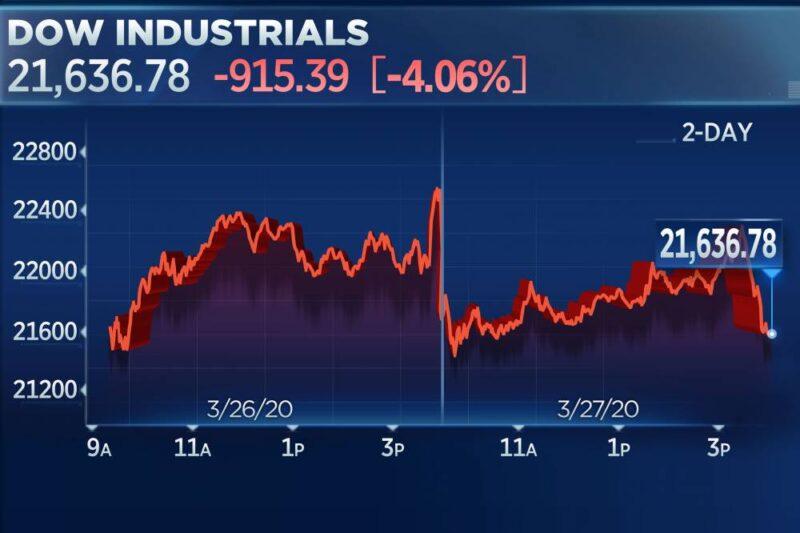 Stocks fell sharply on Friday, giving back some of the strong gains experienced in the previous three days to cap off another volatile week on Wall Street.

Sentiment took a hit as investors focused back on the coronavirus outbreak as the U.S. became the country with the most confirmed cases.

Boeing dropped 10.3% to lead the Dow lower. Chevron and Disney each fell more than 8%. Boeing fell after Treasury Secretary Steven Mnuchin said the airplane maker won't seek a government bailout. Energy and tech were the worst-performing sectors in the S&P 500 as they dropped 6.9% and 4.6%, respectively. Energy was pressured by a 4.8% drop in crude prices.

"We believe medium-term risks are skewed to the downside after this rally," Maneesh Deshpande, Barclays' chief U.S. equity strategist, said in a note on Friday. "Two other uncertainties facing investors (the length of the economic quarantine required to contain the virus and the ultimate economic damage) remain unresolved."

"Bear market 'head-fake' rallies are not uncommon," Deshpande added. The bear runs that began in 2000 and 2007 both had head fakes of more than 20% before ending, Barclays data shows. The biggest bear market head fake came during the bear market that started in 1937, when stocks rallied more than 60% before falling again.

Despite the market's weekly gains, the major averages were still more than 20% below the record highs set last month. Investors have been dumping riskier assets such as stocks amid uncertainty over the economic blow from the coronavirus.

Global cases of the coronavirus have surged to more than 542,700 with at least 85,996 in the U.S., according to data from Johns Hopkins University. The U.S. has now overtaken China as the country with the most confirmed cases in the world. President Donald Trump held a phone call with Chinese leader Xi Jinping, saying the two countries are "working closely together" to fight the pandemic. Meanwhile, UK Prime Minister Boris Johnson has tested positive for the coronavirus.

The Senate passed a $2 trillion coronavirus relief bill earlier this week, and the House approved the historically massive package on Friday, sending it to President Trump to be signed.

"This is going to be an economic fallout. We're seeing in two weeks what we would normally see maybe in a year and a half or two years," said Gregory Faranello, head of U.S. rates trading at AmeriVet Securities.

The wild market swings come in a week when investors have been pulling money across the board and heading for the safety of cash.

S&P 500 just hit a level that could spark the next meltdown: Dwyer