Coronavirus could kill more Americans than some wars 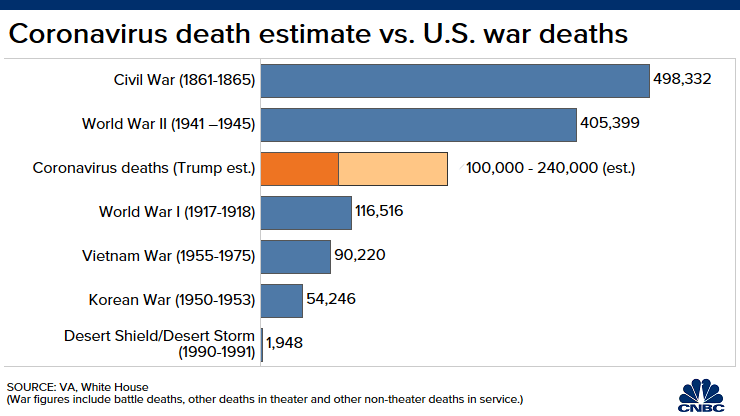 Chris Plank of Maryland holds the headstone of his friend Army Sgm. Bradly Dean Conner, who was killed in Iraq, at Section 60 at Arlington National Cemetery on Veterans Day November 11, 2019 in Arlington, Virginia.Alex Wong | Getty Images

President Donald Trump has compared the coronavirus pandemic to fighting a war — and that outbreak could end up killing more Americans this year than some wars waged by the United States, including the Vietnam and Korean conflicts, and World War I.

And projections issued Tuesday by the White House suggest that the coronavirus has a chance of becoming the third leading cause of current U.S. deaths, after heart disease and cancer, this year.

White House officials estimate that the COVID-19 outbreak will kill between 100,000 and 240,000 Americans this year, even with social distancing, business closures and other mitigation efforts.

"This could be a hell of a bad two weeks," Trump said at a White House briefing Tuesday as officials said a surge of coronavirus cases is coming over that time frame.

The president said that the deaths seen already from what he called "this invisible enemy" have been "incredible."

On the low end of the projection, with 100,000 deaths, the toll would exceed the more than 90,000 total American service battle deaths and nontheater deaths experienced in the Vietnam conflict, and be around double the same type of U.S. deaths in the Korean War.

"As sobering a number as that is, we should be prepared for it," said Dr. Anthony Fauci, director of the National Institute of Allergy and Infectious Diseases, who is on the White House coronavirus task force.

"It will be difficult, no one is denying that we are going through a really difficult time right now."

If 240,000 Americans die from the coronavirus this year, as the projection indicates is possible, it would be nearly half of the total number of Americans who died in the Civil War. That four-year conflict led to more U.S. deaths than any other single war.

The high-end estimate, if realized, would also  put coronavirus deaths well ahead of accidental deaths, which are now the third-leading cause of mortality in the U.S. It would also top stroke and Alzheimer's disease as causes of death.

On the low end of the estimate, coronavirus deaths would exceed deaths caused by diabetes, flu, suicide, drug overdoses and traffic deaths.

"We have to brace ourselves. In the next several days to a week or so we are going to continue to see things go up," Fauci said Tuesday.

"We cannot be discouraged by that because the mitigation is actually working and will work."

Dr. Deborah Birx, the White House coronavirus response coordinator, told NBC's "TODAY" show earlier this week that 200,000 coronavirus deaths could soon be seen even "if we do things almost perfectly" with mitigation and treatment measures.

The president's grim warning on Tuesday contrasts with his optimistic view on the coronavirus two months ago.

In January, Trump had said, "No, not at all," when asked during a CNBC interview if he was concerned that the coronavirus outbreak then being seen in China was at risk of becoming a pandemic.

"It's going to be just fine," Trump assured "Squawk Box" co-host Joe Kernen during the interview at the World Economic Forum in Davos, Switzerland. "We have it totally under control."

Trump in recent days has pointed to an estimate that up to 2.2 million Americans would die from COVID-19 without any mitigation efforts.

View: How Railways could have made the recent mass migration less painful