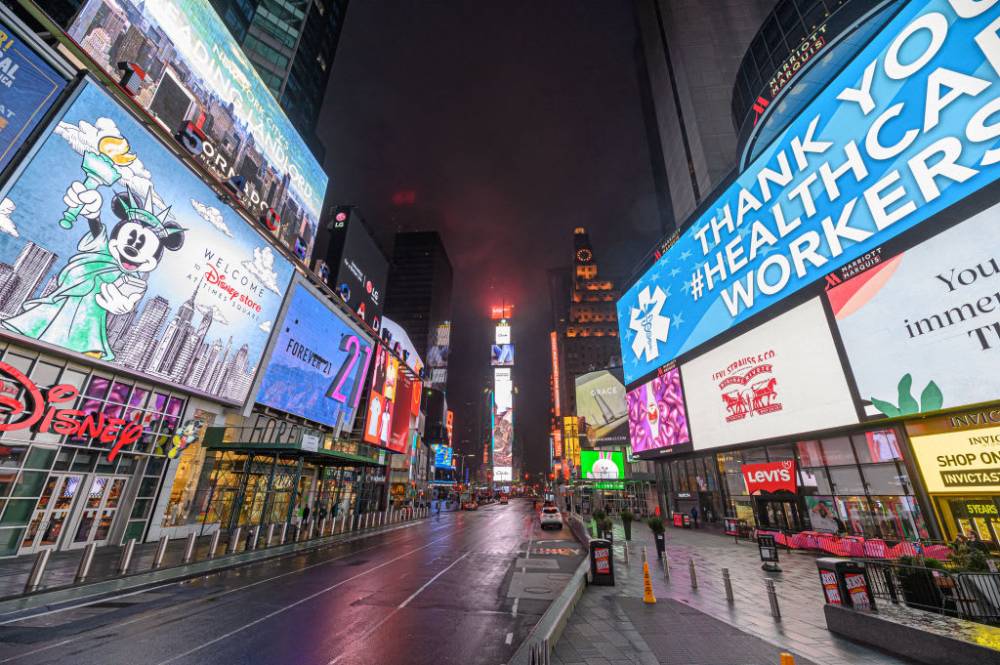 Lights shines still in Times Square as people remain at home to stop the spread of coronavirus on March 29, 2020 in New York City.Noam Galai | Getty Images

President Donald Trump's decision to keep coronavirus safety guidelines in place until April 30, coupled with some promising developments from health companies, has helped calm some of the angst in the stock market, for now.

The S&P 500 ended up 3.4% at 2,626, and health care was the best-performing sector, up 4.7%. Johnson & Johnson jumped about 8% after the company announced it had a vaccine candidate. Abbott Labs stock also popped on news the company would be able to provide 50,000 test kits a day that could detect the virus in a matter of minutes. Henry Schein Inc. was higher on news of its test kit. Gilead and Eli Lily rose as investors focused on their coronavirus-related treatments.

Trump putting a new deadline on social distancing guidelines helped set a new goal post for the economy, and while the date could again be extended, it removes some of the uncertainty about the government's approach to reopening the economy. Trump had said he would like to see the economy reopen by Easter, which is April 12, a move that was considered unrealistic by health experts.

VIDEO1:2301:23I agree with Larry Fink, this is going to be a generational blow: Tony DwyerClosing Bell

"I do think he got mugged by reality," said Peter Boockvar, chief investment strategist at Bleakley Advisory Group. "It may relieve some of the pressure, and I guess the friction, between those who are focused on the health side, who say we have to shut down for a while, and those who want to balance the economic recovery with the health need. … We bought ourselves some mental time about not rushing back too soon."

Boockvar said Abbott's announcement that it could quickly start rolling out the test kits was also a psychological positive.

"One of the clear aspects of getting it under control is testing, and separating the healthy from the sick," said Boockvar.

Availability of testing has been an issue, and the U.S. has lagged some other countries in its ability to test.

According to Johns Hopkins University, the number of cases in the U.S. grew above 140,000 and deaths topped 2,500. The New York area remains the biggest hot spot, but Louisiana and Michigan also reported higher concentrations of the illness. Shutting down the economy, by keeping people in their homes and out of crowds and workplaces, is viewed as the most effective way of stopping the spread of the disease.

"The fact is getting that April 30 deadline out there is what everyone was thinking about," said Julian Emanuel, chief equity and derivatives strategist at BTIG. "It struck the ideal balance between medicine and economics. From the financial markets' point of view, you have an entire month to continue to look at data about what may or may not happen. [Trump] struck the right balance. It's like everything else. The market doesn't like surprises. The market got something from him last night that was completely consistent with what expectations were. That in itself is a market calming factor. What we're going to be looking for is a volatility calming factor."

Emanuel said the volatility has not ended, and there could be a retest of the market bottom set last Monday, when the S&P 500 fell to 2,191. It  was at 2,600 at midafternoon Monday.

"A lot of the good news about what's been done and what can be done about setting expectations has been out. In the next few weeks, what you're going to see is the numbers start to climb," said Emanuel. "From a market standpoint and a financial standpoint, everything is on the table and now the market is just subject to the ebb and flow of news which, in our view, makes it likely you get some sort of retest of the lows."

VIDEO3:2603:26BlackRock's Fink: When we exit this crisis, the world will be differentClosing Bell

Markets are focused on a debate about whether the U.S. economy can quickly shake off the impact of the shutdown or not. While some economists expect a big "V" shaped bounce back in the third quarter, after a steep second quarter contraction, others see a slower recovery, more like a "U" shape.

Despite the market's Monday gains, oil was a major drag on sentiment as West Texas Intermediate oil futures fell below $20 per barrel and European Brent was off more than 11%. Oil is falling on worries about a lack of demand but also because of the oil price war fueled by Saudi Arabia and Russia.

Jack Ablin, chief investment officer of Cresset Wealth Advisors, said the fact the White House is aligned with medical experts is a bit of realism for investors and a positive. He said the initial knee-jerk reaction to Trump's comments on a possible Easter reopening was positive, as investors hoped for a return to normalcy.

"That was perhaps this notion of the cure being worse than the disease," said Ablin.

Ablin said the economy will come back, but may not go back to a normal activity level right away.

Many market pros see three important elements to battling the virus. One is the Fed's monetary response, and it has bombarded markets with liquidity and bond buying. The second is the fiscal response, and Congress adopted a $2 trillion package to aid the economy Friday. The third is health policy and stabilizing the virus, which is viewed as key to turning both the economy and markets around.

Ward McCarthy, Jefferies chief financial economist, said the coronavirus has created a unique strain for the economy, and it's positive to have the Trump administration aligned with scientists.

"We have never before been in a situation where the government has mandated a shutdown of a wide swath of economic activity, and then at the same time, tried to offset the shut down it caused," McCarthy said. "The short term costs of the shut down are huge, but the benefits to the public health are huge. In the long term, the smarter thing to do is to be overly cautions on the public health side. The economy will come back."

Treasury yields, which move opposite price, were lower Monday. "The bond market is pricing in lower growth and lower inflation," said Jon Hill, senior rate strategist at BMO. "It's hard to argue that there's much of a broad takeaway from Trump. … I like to see the optimism of the equities guys, but it's hard to see it in the data. …The feedback to [Trump] saying we should reopen by Easter was broadly negative.'"

Trump said Sunday that Easter was just an "aspiration" and he hopes Americans will "be well on our way to recovery" by June 1.

"Nothing would be worse than declaring victory before the victory has been won," the president said. Trump said his administration was extending the guidelines to avoid a major death toll.

The president pointed to modeling that forecast 2.2 million deaths in the U.S. if drastic measures weren't taken to mitigate the outbreak. Trump said the administration is working to keep the projected death toll below 100,000.