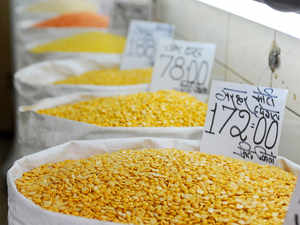 Traders have sought fewer restrictions on transport and movement of grains and other food commodities by the railways.

“The supply of edible oil to consumers will be a challenge, especially in eastern India, if labour issue remains. There is already a 40% drop in edible oil processing, packaging and dispatch due to labour issue,” said Angshu Mallick, deputy chief executive officer at Adani Wilmar. 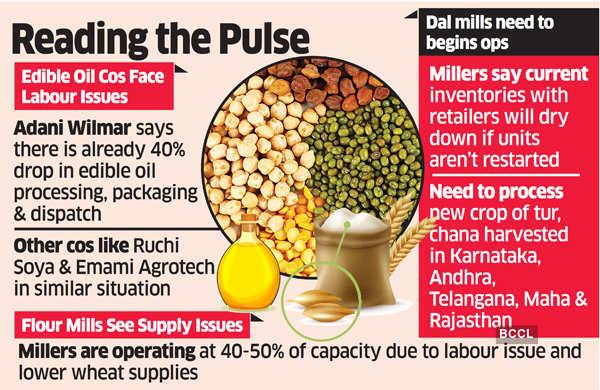 In some instances, landlords are not allowing tenants to go for work and in other cases due to lack of public transport, they are unable to come to the factories, said Mallick.

Similarly, flour millers who annually process 22 million tonnes of wheat to make flour, maida and suji too are operating at 40% to 50% of their normal capacity due to labour issue and less supplies of wheat.

“We have not increased our product prices even though we are facing a difficult time,” said Sanjay Puri, president of Roller Flour Millers Association.

“We are just asking government to ensure labour come to factories and allow direct sale of wheat from the FCI godowns, apart from the weekly auction it does. This will enable easier access to stocks,” he added.

The government should also reduce the 5% GST on branded food products, he said.

“We have requested the Centre to tell state governments to allow us to operate dal mills,” said Suresh Aggarwal, president of All India Dal Mill Association. “The current inventories with retailers will dry down if we don’t run our units. Already 75% of the mills were closed, largely in Madhya Pradesh, Maharashtra and Karnataka due to the lockdown and curfew.”

Aggarwal said the new crop of tur and chana has been harvested in Karnataka, Andhra Pradesh, Telangana, Maharashtra and Rajasthan and needed to be processed.