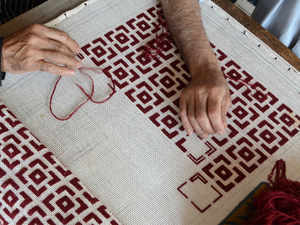 New Delhi: India has cancelled its major handicrafts and gift trade show in the wake of the COVID-19 outbreak.

The Export Promotion Council for Handicrafts (EPCH) on Sunday said it has cancelled the 49th edition of IHGF – Delhi Fair Spring-2020 in view of present status of COVID-19 in India and abroad.

Exports from major craft clusters like Moradabad, Saharanpur, Jodhpur, Jaipur, Agra, Narsapur, Firozabad, North-eastern region and many others is going to be affected with the cancellation of this fair, it said.

As per Rakesh Kumar, Director General of EPCH, it has become unviable to organize a show of such magnitude in near future due to the nationwide lockdown.

The fair, which was earlier to be held from April 15 – 19, was planned to be postponed to June or July.

“Over 10,000 visitors, including 7000 overseas buyers and their representatives, were expected to turn up for the show which was to host over 3,200 exhibitors displaying best of the Indian handicrafts from all across the country,” textiles ministry said in a statement.

The next (50th) edition of IHGF-Delhi Fair Autumn will be organized from October 14-18 2020 at India Expo Centre & Mart, Greater Noida in Delhi NCR.

Coronavirus worries and strife: Investors fear markets not out of woods despite big rally