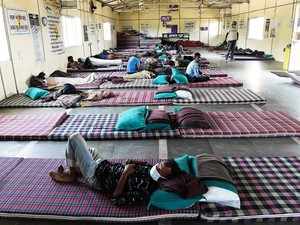 WorldIndiaConfirmed2,547Deaths62Confirmed1,013,157Deaths52,983The sudden displacement of migrant labour would have far-reaching impact on the Indian economy and states should be prepared to deal with the consequences of behavioural changes forced by the lockdown, warn experts.

“Coronavirus has taught workers that distance matters,” professor S Irudaya Rajan at the Centre for Development Studies, Thiruvananthapuram. Irudaya Rajan, one of India’s foremost experts in population studies and who pioneered the annual Kerala Migration Survey, says that the 2008 global economic crisis’s lesson was that “jobs matter”. The virus has given a new lesson in distance and could lead to a significant reduction in long-distance migration, he says.

A number of migrant workers who fled the big cities may never return, preferring to eke out a living on their marginal farms or find work in nearby towns. It would deprive industrial centres such as Gurugram, Surat and Tiruppur of labour for a long period of time, likely raising the wage burden on small- and medium-sized units struggling to crawl out of recession.

The Economic Survey 2016-17 had estimated that at least nine million people migrate annually within the country, most of them in search of work. While the top destination for migrants is Delhi, followed by Mumbai, the southern states have become a migrant magnet in recent years. The largest number of them set off from Bihar, UP, Bengal and Assam, often traveling more than 3000 km to distant Kerala. The sudden lockdown and the consequent shut down of transport created a humanitarian crisis in many states as panic-stricken migrant workers took to the highways trying to walk hundreds of kilometres home.

Such panic has happened earlier too in select cities. For instance, Bihari workers fled from Maharashtra some years ago, when hostile nativists turned against them. Racial hostility spread panic amongst migrants from the North-East living in Bangalore in 2016.

“Such incidents cause a destination shift,” says Chinmay Tumbe, who teaches economics at IIM, Ahmedabad. Tumbe, author of the India Moving: A History of Migration, points out that coastal Orissa sent a large number of workers to Burma a hundred years ago. When the local atmosphere became hostile, almost all of them moved to Gujarat.

Typically, workers wait out a crisis before setting out again in search of work. Tumbe reckons the waiting period could be much longer this time.