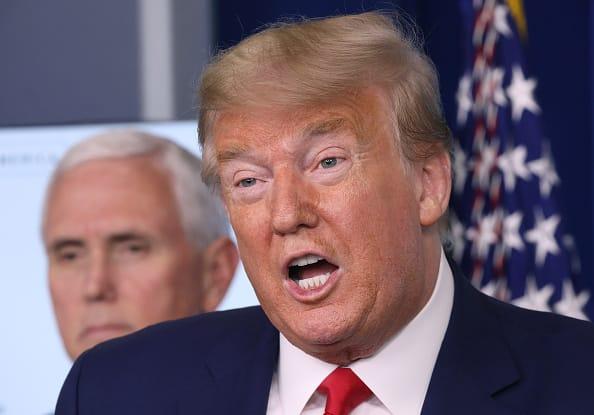 "This could be a hell of a bad two weeks. This is going to be a very bad two, and maybe three weeks. This is going to be three weeks like we've never seen before," Trump said at a White House press conference Tuesday. White House officials are projecting between 100,000 and 240,000 deaths in the U.S. with coronavirus fatalities peaking over the next two weeks. "When you look at night, the kind of death that has been caused by this invisible enemy, it's incredible."

The U.S. has more coronavirus cases than any other country across the globe with 184,000 confirmed infections, according to data compiled by Johns Hopkins University. New York has now become the new epicenter of the outbreak in the world with 75,795 confirmed cases as of Tuesday morning, more reported infections than China's Hubei province where the coronavirus emerged in December.

President Donald Trump looks on during the daily briefing on the novel coronavirus, COVID-19, in the Brady Briefing Room at the White House on March 31, 2020, in Washington, DC.Mandel Ngan | AFP | Getty Images

Earlier in the day, New York Gov. Andrew Cuomo said the outbreak in the state may not peak for three weeks.

Trump, who grew up near New York City's Elmhurst hospital in Queens, said no one can believe officials are setting up refrigerator trucks as temporary mortuaries outside the hospital. Trump said New York "got a late start" in rolling out its mitigation efforts.

New York City is setting up a handful of makeshift field hospitals to house coronavirus patients at the Jacob K. Javits Center, in Central Park and at the tennis courts in Queens that host the U.S. Open. De Blasio said the city is working with the federal government, the hotel industry and various other businesses to turn other buildings into potential medical facilities. More than 1,000 people in New York City alone have already died from the coronavirus, according to data updated at 5 p.m. ET by the NYC Health Department.

"This is going to be the roughest three weeks we've ever had in this country," Trump said. "I wanted as few as a number of people to die as possible. And that's all we're working on."

Dr. Deborah Birx , coordinator for the White House coronavirus task force, and Dr. Anthony Fauci said they are still projecting between 100,000 and 200,000 deaths in the U.S. with a peak in fatalities over the next two weeks. A slide presented at the press conference showed as many as 240,000 deaths.

"As sobering a number as that is, we should be prepared for it," said Fauci, who also sits on the task force. "It will be difficult, not one is denying that we are going through a really difficult time right now."

Fauci and Birx both said they hope that efforts will result in fewer of those deaths if possible, especially in hotspots like New York and New Jersey. They are also trying to prevent new outbreaks from cropping up in other areas of the country.

"We have to brace ourselves. In the next several days to a week or so we are going to continue to see things go up," said Fauci, who's director of the National Institute of Allergy and Infectious Diseases. "We can not be discouraged by that because the mitigation is actually working and will work."

Birx praised local and state officials in California and Washington state for shuttering nonessential businesses and schools early on, saying that helped slow the outbreak in those states. She said cases in those states haven't spiked like they have in New York.

There are very few fatalities among young people in the U.S., Birx said, citing similar results in Italy and elsewhere in the world. People with underlying conditions are also at greater risk of death, scientists say.

Earlier Tuesday, the Centers for Disease Control and Prevention released preliminary data showing that people with diabetes, chronic lung disease, heart disease or those who smoke may be at increased risk of developing severe complications, even death, if they get infected with the coronavirus.

The death projections "are very sobering, and when you see 100,000 people, and that's a minimum," Trump said. "A hundred thousand is, according to modeling, a very low number." The death toll would be even higher without any mitigation measures with some estimates as high as 2.2 million fatalities, Trump said.

"This is not the flu," Trump said. He said some executives with "great common sense" suggested that the U.S. "ride it out" and not do mitigation. "This is not to be ridden out."