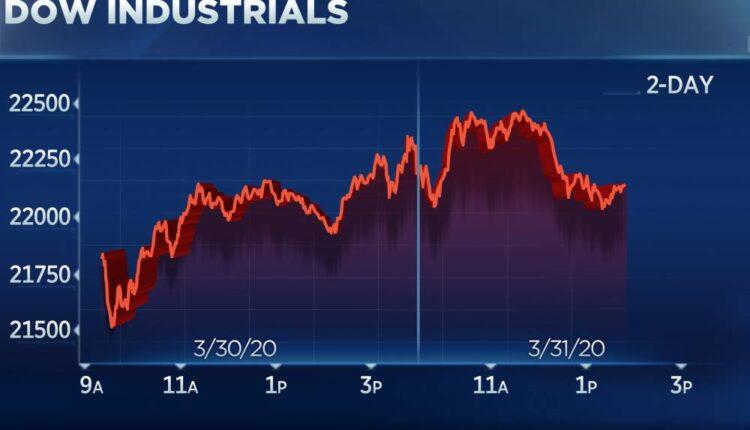 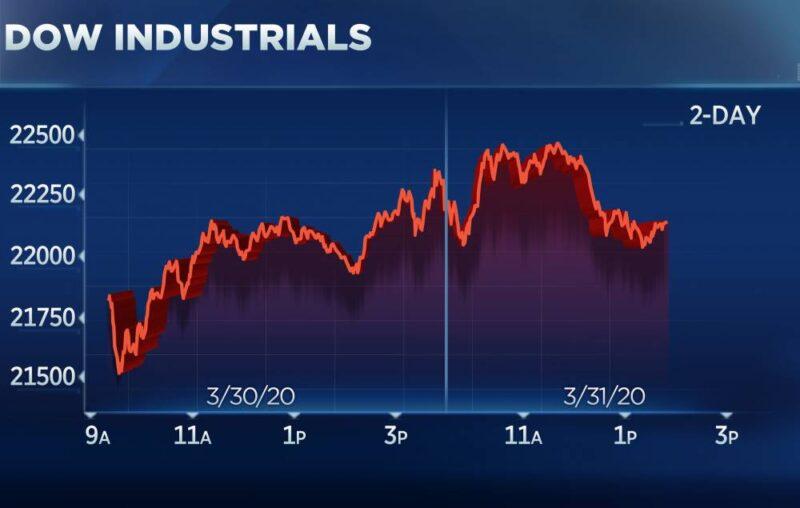 Stocks fell on Tuesday, the last day of the first quarter, as investors wrapped up a period of historic market volatility sparked by the coronavirus pandemic.

Investors digested a slew of news that may be contributing to the volatile swings on Tuesday, along with the monthly rebalancing of portfolios:

Wall Street was also poised for sharp monthly losses. The Dow and S&P 500 are down more than 12% each in March.

To be sure, stocks have regained some ground since last week. The Dow has rallied more than 18% since reaching a low on March 23 while the S&P 500 has gained 16.1% since then. Part of those gains came on Monday, when the Dow jumped nearly 700 points after President Donald Trump extended the timeline for social distancing guidelines to April 30, which many believe will reduce economic damage in the long run.

"As we conclude an unforgettable March and 1st Quarter today, the market seemingly has drifted (spiked) to no man's land," wrote Frank Cappelleri, executive director at Instinet. He noted that stocks have rallied from their lows last week but are still well below their record highs. But, "for what it's worth, April has a better track record on average (+1.7% the last two decades, with a 75% win rate). It, too, has tended to do better in the final two weeks."

Stocks have managed to rally to end the month despite concerning economic data including last week's record number of jobless claims and Monday's worse-than-expected manufacturing reading from the Dallas Fed.

However, many on Wall Street are calling for even more selling before the market can hit a bottom. Historically, bear markets are often punctuated by sharp bounces on their way down to a trough.

"Last week's double-digit gain for markets was a welcome relief rally, though market bottoms are rarely as clean as this one has been," said Mark Hackett, Nationwide's chief of investment research. "Markets will need to reflect more traditional interactions before confidence in a bottom can be reached."

Investors continued to grapple with the worsening outbreak in the U.S. as the confirmed cases rose to more than 153,200, according to data from Johns Hopkins University. The U.S. has also officially become the country most affected. Trump said Sunday he hopes the country will "be well on our way to recovery" by June 1.

"We anticipate that market volatility will resist until liquidity, credit, and health risks have demonstrably passed," said Lauren Goodwin, economist and portfolio strategist at New York Life Investments. "With major policy stimulus now in place in the U.S., we expect grim health and social news to dominate the next couple of weeks."