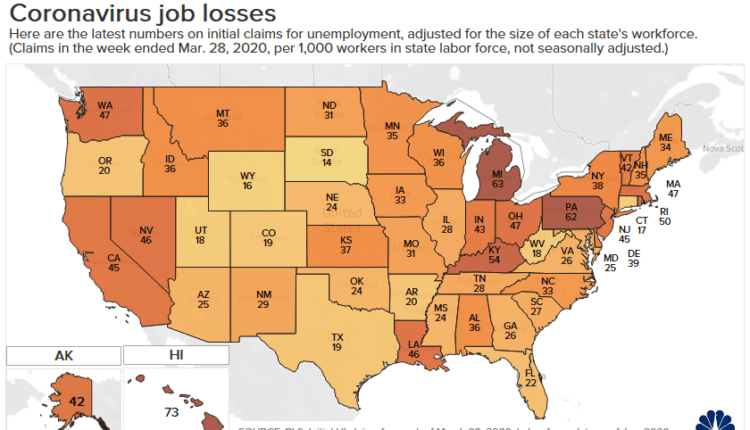 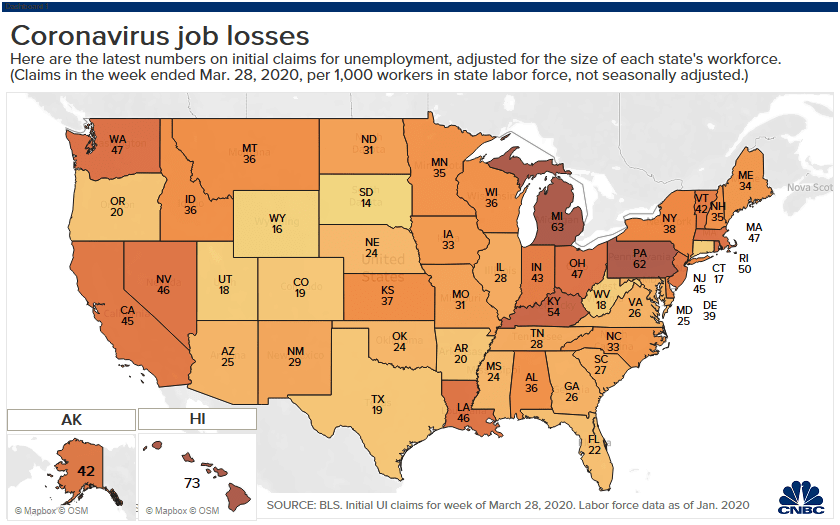 Another record-breaking spike in U.S. jobless claims hit Americans across the country, but varied in impact by state as each governor takes a different tact in slowing the spread of COVID-19.

Claims for state unemployment benefits were most concentrated in Hawaii, Pennsylvania, Rhode Island, Washington state and Massachusetts with claims of 73, 62, 50, 47 and 47 per 1,000 workers, respectively. The data is for jobless filings through the end of last week.

Those were the states that saw the most intense surges in claims when controlling for differences in the size of each state's labor force.

Nevada, New Jersey, California and Vermont also saw some of the most concentrated bumps in unemployment filings, according to the unadjusted Labor Department data.

Looking at absolute unemployment unadjusted for state population, California came out highest with more than 878,000 workers filing for benefits, up 692,000 from the prior week's print of 186,000 claims. That's a more than 350% increase.

The Labor Department issued a special notice at the top of its release Thursday morning explaining the coronavirus's impact on the jobless claims data.

"States continued to identify increases related to the services industries broadly, again led by accommodation and food services. However, state comments indicated a wider impact across industries," the Labor Department added. "Many states continued to cite the health care and social assistance, and manufacturing industries, while an increasing number of states identified the retail and wholesale trade and construction industries."

The headline jobless claims number for the week ended March 28 of 6.6 million doubled the prior week's record-setting 3.3 million claims. A deluge of American workers continues to file for unemployment benefits as the spread of the coronavirus forces state governments to shutter business.

Global food shortages: Here’s why grocery stores don’t have what you want