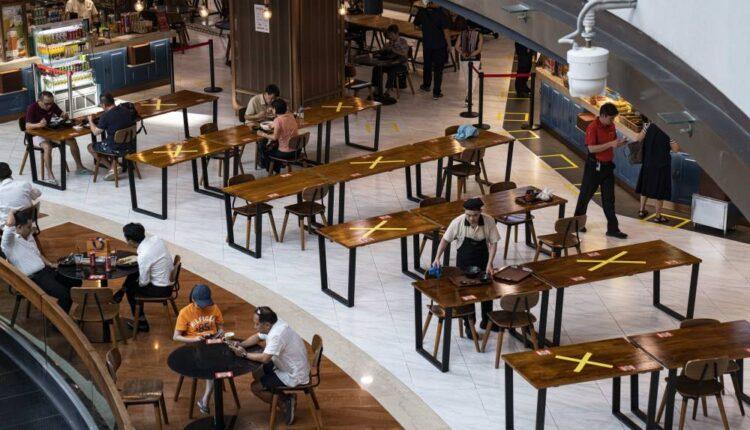 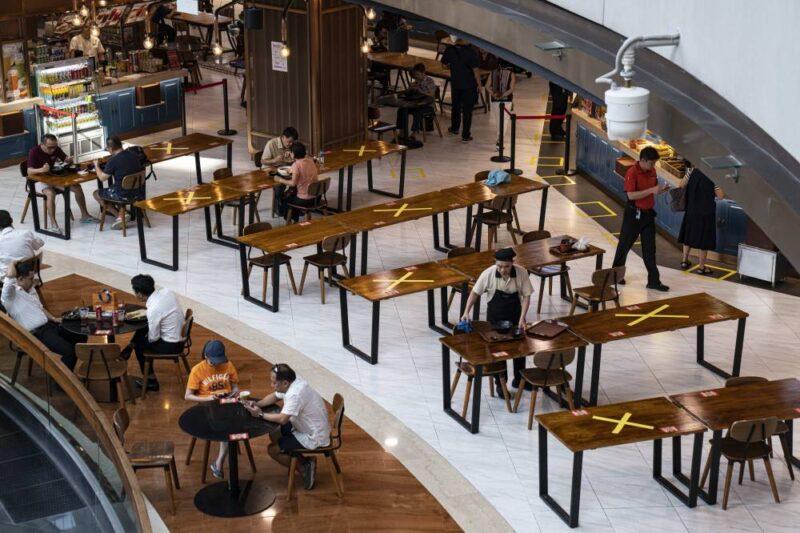 The data above was compiled by Johns Hopkins University as of 7:58 a.m. Beijing time.

4:30 pm: US, Italy and Spain have the most coronavirus cases. These charts show their infection curves

The ongoing coronavirus pandemic has shown few signs of abating and is now one of the largest threats to the global economy and financial markets.

The virus, first reported in the Chinese city of Wuhan in December, has spread to 180 countries and territories, according to data compiled by Johns Hopkins University. Globally, more than 850,000 infections have been reported, with over 42,000 deaths, the data showed.

Take a look at these seven charts that show how the coronavirus disease, which has been formally named COVID-19, has spread in countries with the largest outbreaks.

Elsewhere, France, Ireland and Spain all saw multiyear low readings for their PMIs. Only the Netherlands recorded a PMI above the 50.0 level in March, though growth there was marginal. The 50-point mark separates expansion from contraction. — Holly Ellyatt

Italy's Economy Minister Roberto Gualtieri said on Wednesday that a forecast of a 6% fall in gross domestic product due to the coronavirus emergency this year is realistic. The forecast was made by Italian business lobby Confindustria.

"Unfortunately the estimates are realistic … at the same time we can aim for a vigorous recovery," Gualtieri told newspaper Il Fatto Quotidiano in an interview published Wednesday.

"The more rigorous and effective we are in tackling the epidemic, the sooner we can start again. The economic measures that we are taking to avoid layoffs, support income and provide all the liquidity necessary to avoid a reduction in production capacity are all necessary," he said. — Holly Ellyatt

Gaming revenue in Macao dived 79.7% in March year-on-year as the flow of tourists dried up due to the pandemic, Reuters reported, citing the Chinese territory's government.

China's National Health Commission (NHC) reported 36 new cases as of March 31, of which 35 were "imported." It had seven more deaths, of which 6 were in Hubei, the epicenter of the outbreak.

12:20 pm: Investors can do some buying as markets are 'a lot cheaper,' says billionaire investor Howard Marks

Oaktree Capital co-chairman Howard Marks is leaning toward a more negative outlook because of the uncertainty from the coronavirus pandemic, but still, he said investors can do some buying as "things have gotten cheap enough."

He urged investors to take a moderate approach in these uncertain times, adding that his approach "is not black or white, buy or sell." "I never believe that I know when's the bottom, but I know things have gotten a lot cheaper and it's reasonable to do some buying. If it goes lower, do more buying," Marks told CNBC's Tanvir Gill. — Weizhen Tan

Nissan Motor said it stopped operating the vehicle production line at its Kyushu plant to begin disinfection work after an employee there tested positive for COVID-19 on March 31. It did not give an indication of when operations may resume, saying that it would be decided based on the guidance of health authorities.

Last week, the automaker said it would temporarily adjust production at three of its manufacturing facilities in Japan due to decreased demand in the automobile market. — Saheli Roy Choudhury

Business confidence in China improved as output resumed gradually after lockdowns were lifted, a private survey showed. The Caixin/Markit manufacturing Purchasing Manager's Index for March was 50.1.

Analysts polled by Reuters had expected the Caixin/Markit PMI to come in at 45.5, compared with February's sharpest contraction on record at 40.3. PMI readings above 50 indicate expansion, while those below that level signal contraction.

Caixin and IHS Markit noted demand challenges ahead. The Chinese government implemented large-scale lockdowns and quarantines of millions of people since late January to contain the outbreak of the coronavirus disease, formally known as COVID-19. This restricted movement and economic activity. — Huileng Tan

11 am: Japanese carmakers brace for US sales shock as coronavirus hits consumers

As the U.S. auto industry braces for the biggest downturn since the 2008 financial crisis, analysts are counting the cost for Japan's automakers — whose fortunes depend heavily on the world's second-largest car market.

Another 101 people in South Korea were confirmed to have the coronavirus, bringing the country's total number of infections to 9,887, according to the latest numbers from the Korea Centers for Disease Control and Prevention.

Three more people died from the virus; the total death toll in the country stands at 165. Though the infection rate in South Korea has relatively slowed down compared to what it was at its peak in late February, new reported daily cases are still hovering near or above 100.

As part of the measures to contain the spread of infection, South Korea made it mandatory for all new arrivals to the country to be placed in self-quarantine for 14 days starting Wednesday, Yonhap reported. Those who do not have a place of residence in the country will be charged around 100,000 Korean won ($82) a day for using public facilities, according to the news agency. — Saheli Roy Choudhury

HSBC shares fell 9.5% and Standard Chartered was down 7.18% after both lenders canceled dividend payments at the request of the U.K. financial regulator in light of the coronavirus pandemic.

Standard Chartered also said it received the same request from the Prudential Regulation Authority and in light of the unprecedented challenges facing the world due to the coronavirus pandemic, its board "has decided after careful consideration to withdraw the recommendation to pay a final dividend for 2019 of 20 cents per ordinary share and to suspend the buy-back programme announced on 28 February 2020."

StanChart also said: "No interim dividend on ordinary shares will be accrued, recommended or paid in 2020."

Los Angeles Mayor Eric Garcetti asked Los Angeles residents to report businesses violating the city's order to stay at home and said that recurring violations could be submitted to a new city website. 144 businesses in Los Angeles have been visited by the LAPD in relation to violations of the order, according to the mayor.

Washington state earlier released a web form on Monday to speed up the process of reporting businesses violating that state's stay home order.

"You know the old expression about snitches, well, in this case, snitches get rewards. We want to thank you for turning folks in and making sure we are all safe," Garcetti said. — Kif Leswing

8:50 am: Japan's large manufacturers are pessimistic about business conditions

The Bank of Japan's "Tankan" survey showed Japanese manufacturers are pessimistic about business conditions in the country.

The closely-watched sentiment index among large manufacturers fell to negative 8 in the three months that ended on March 31 from zero in the October-December quarter; a negative reading implies most of them see business conditions to be unfavorable.

It underscored the challenges Prime Minister Shinzo Abe faces as he attempts to navigate Japan's economy through the global impact of the coronavirus pandemic. Sentiment also worsened among medium and small manufacturing companies as well as the non-manufacturing firms.

The indexes are calculated by subtracting the percentage of businesses which said they find conditions unfavorable from those that said they find it favorable. The survey is often an indicator of Japan's economic health and factors into the central bank's considerations for monetary policy implementation. — Saheli Roy Choudhury

7:46 am: Korean Air reportedly to suspend flights to Washington DC

Korean Air will suspend flights to Washington D.C. starting April 13 through to the end of May, Reuters reported.

The airline cited the coronavirus as a reason and a spokesperson said passenger demand for air travel to the U.S. fell sharply due to the rapid spread of the virus there, Reuters said.

Korean Air has already suspended or reduced routes between Incheon and a number of U.S. cities including Los Angeles, New York, and Seattle. — Saheli Roy Choudhury

The fast-spreading coronavirus, which causes the disease COVID-19, has killed at least 42,081 people around the world since it was first reported in China's Hubei province late last year, according to data compiled by Johns Hopkins University.

Most of the deaths occurred in Europe: 12,428 people have died in Italy, 8,464 in Spain and 3,523 in France. China has recorded 3,309 deaths to-date, though some have raised questions about the accuracy of the reported numbers there.

There are at least 856,955 cases of infection worldwide, with more than 187,919 infected in the United States alone. About 177,917 people have recovered from the disease, most of them in China, followed by Spain, Germany, Italy, and Iran. — Saheli Roy Choudhury

The fund, which was established as part of a more than $2 trillion stimulus bill President Donald Trump signed into law last week, became a point of contention for Democrats who worried that earlier versions of the bill gave Mnuchin too much discretion over how the funds are dispersed. After tense negotiations, Republicans and Mnuchin agreed to add an inspector general to oversee that fund, as well as a congressional committee.

But Trump on Friday questioned the authority of the inspector general. According to a signing statement he released alongside the bill, he declared his belief that the inspector general needs his permission before letting Congress know whether Mnuchin or Treasury block efforts to glean information. — Lauren Hirsch

"This is going to be a rough two-week period," Trump said at a White House press conference. White House officials are projecting between 100,000 and 240,000 deaths in the U.S. with fatalities peaking over the next two weeks. "When you look at night, the kind of death that has been caused by this invisible enemy, it's incredible." — Berkeley Lovelace Jr.

People with diabetes, chronic lung disease, heart disease or those who smoke may be at increased risk of developing severe complications if they get infected with the coronavirus, the Centers for Disease Control and Prevention said Tuesday.

In its first report looking at underlying health conditions that could make COVID-19 worse, the CDC analyzed data from confirmed cases in all 50 states and four U.S. territories between Feb. 12 and March 28. The agency examined 7,162 cases where data was available on underlying health conditions or other potential risk factors. Confirmed cases among people repatriated to the United States from Wuhan, China, where the virus emerged, and the Diamond Princess cruise ship were excluded, the agency said. — Berkeley Lovelace Jr.

Read CNBC's coverage from the U.S. overnight: Coronavirus expected to cripple US auto sales, New York cases jump to over 75,000

Charts show the coronavirus spike in US, Italy and Spain