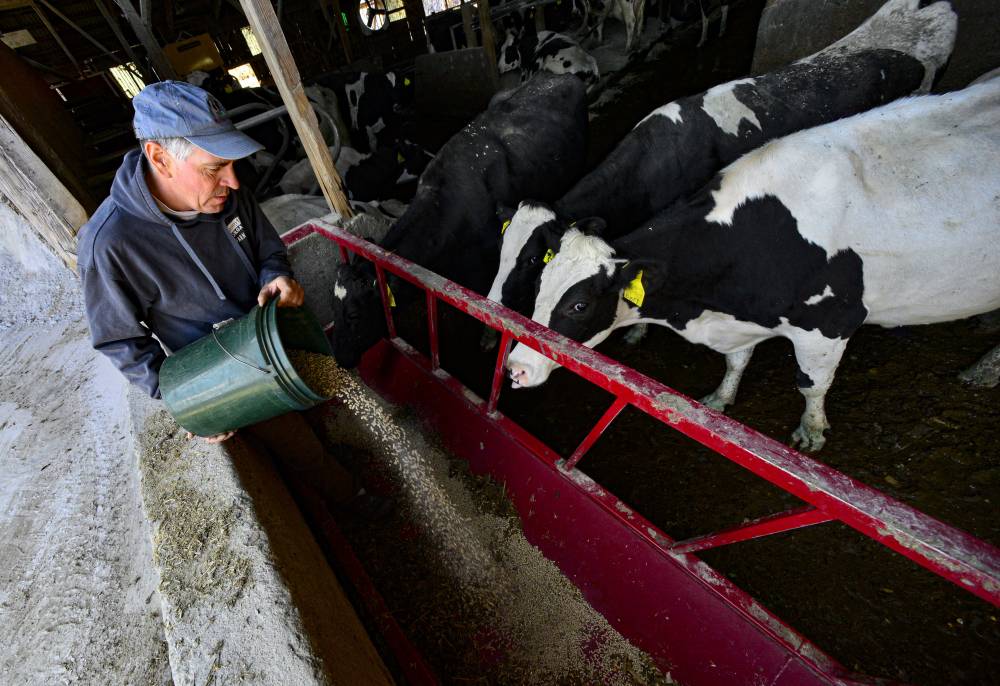 In this photo taken March 20, 2020, cattle rancher Joe Whitesell rides his horse in a field near Dufur, Oregon, as he helps a friend herd cattle.Gillian Flaccus | AP

U.S. farmers have endured a slew of financial hardships over the past few years.

The U.S.-China trade war sent scores of farmers out of business. Record flooding inundated farmland and destroyed harvests. And a blistering heat wave stunted crop growth in the Midwest.

Now, the coronavirus pandemic has dealt another blow to a vulnerable farm economy, sending crop and livestock prices tumbling and raising concerns about sudden labor shortages.

"We were already under extreme financial pressure. With the virus sending the prices down — it's getting to be the straw that broke the camel's back," said Iowa farmer Robb Ewoldt.

"We were hoping for something good this year, but this virus has stopped all our markets," he said.

Farmers are worried about labor shortages right before planting season starts in April. In an effort to curb the spread, the Trump administration recently restricted immigration from Mexico — a key source for cheap farm labor in the U.S.

But panic is surging as more states shutter businesses and order people to stay mostly indoors. Consumer demand for items like beef, chicken and fish has dropped as restaurants close indefinitely. More people are opting for cheaper, nonperishable goods like pasta and beans at grocery stores.

Dairy prices have also fallen as school cafeterias and fast-food restaurants shutter, though grocery sales have surged. But milk prices are expected to fall by as much as 25% this year, a serious blow to milk makers already grappling with record low prices.

"It comes down to every business's ability to absorb loss," said upstate New York dairy farmer Nathan Chittenden. "All those coffeehouse and restaurants closing in the city not using cream is a huge hit to us."

Chittenden depends on truck drivers to pick up milk from his farm every day. But he's worried about possibly losing that service as infections surge in the state. "We are used to temporary uncertainty," he said, citing weather disasters that affect operations. "But not this prolonged situation."

Corn farmers are getting hit especially hard. A combination of low oil prices and a sudden reduction in driving across the country has cut demand for ethanol. Corn is a primary input in ethanol production.

Ewoldt, the Iowa corn and soybean farmer, said he doesn't have the capital to continue farming the same amount of land, especially since lenders have less money to provide farmers amid the price drops.

He's decided to farm on less land this year because he can't afford to rent it out the usual acreage, and is already in two years of debt exacerbated from trade war tariffs and climate-related disasters.

"We've stopped saying it can't get worse," Ewoldt said, adding that several years of financial losses coupled with the price drops from the virus have made farm operations impossible.

Art Miller, one of three partners in Miller Farm Inc. of Vernon, feed the cows on the farm on Wednesday, March 18, 2020. Miller said with more people eating at home there has been more of demand currently for Stonyfield Yogurt.Kristopher Radder | The Brattleboro Reformer | AP

A call for farm bailout

U.S. livestock producers have urged the Department of Agriculture to allow them to delay payments for government loans in order to to help farmers deal with the pandemic's impact on marketing and prices. Efforts to secure debt assistance for farmers have been on the rise in the last week.

"Farmers who depend on direct access to customers … effectively have lost their ability to sell their produce," said Dale Moore, executive director of the American Farm Bureau Federation. He cited shutdowns of urban and rural farmers markets.

Some producers are optimistic that the Trump administration will provide some financial relief amid the pandemic, including a potential bailout package after this year's harvest season ends.

The U.S. coronavirus stimulus bill passed by the House and Senate adds $14 billion to the Agriculture Department's Commodity Credit Corp (CCC) spending authority. It provides another $9.5 billion for farmers hurt by the pandemic.

Even so, the National Cattlemen's Beef Association sent a letter to Congress last week asking if lawmakers can increase the CCC lending authority to $50 billion, arguing that cattle prices have continued to plummet along with commodity prices.

Arlan Suderman, chief commodities economist for INTL FCStone, said a stimulus package to help boost commodity prices should provide incentives for employers to keep employees. Once the pandemic is over, those employees will have greater confidence in the economy and will spend more, increasing demand for ethanol, beef and pork, among other things, he said.

Onley, the North Carolina farmer of wheat and soybeans, said he has faith in the Trump administration to protect U.S. farmers.

"The American producer and the country — we're going to see good days coming," Onley said. "But it's tough right now. We just need some help to get through the tough times."