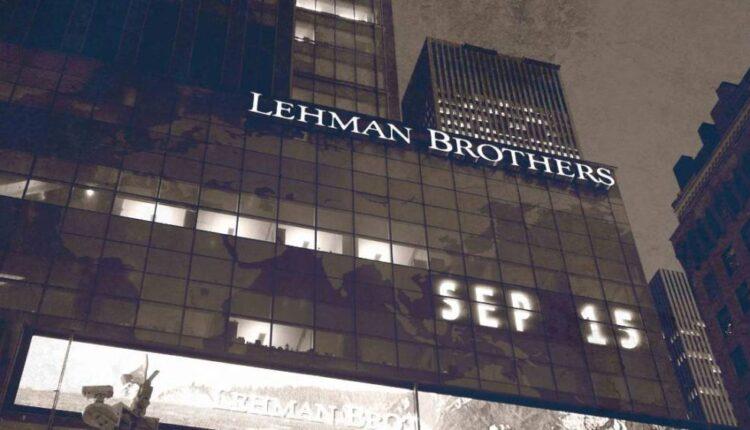 This story originally published on September 14, 2018.

New York (CNN Business)Legendary investment bank Lehman Brothers was on fire — and no one was coming to put it out.

What ensued was the largest and most complex bankruptcy in American history. But that doesn’t do justice to the damage Lehman’s demise caused the financial system. The implosion of Lehman Brothers — and the mayhem it unleashed — was the most terrifying moment for business and the US economy since the Great Depression.

“It was the moment when the financial crisis fully burst upon us, when panic seized the markets,” Phil Angelides, who led the official bipartisan inquiry into the 2008 meltdown, told CNN. Read MoreLehman’s failure shook Wall Street to its core. The Dow plummeted 504 points, the equivalent of 1,300 points today. Some $700 billion vanished from retirement plans and other investment funds. The panic that followed plunged the American economy into a severe downturn, now known as the Great Recession.Today, Lehman Brothers and its CEO Dick Fuld are the poster children for the reckless risk-taking that wrecked the economy. 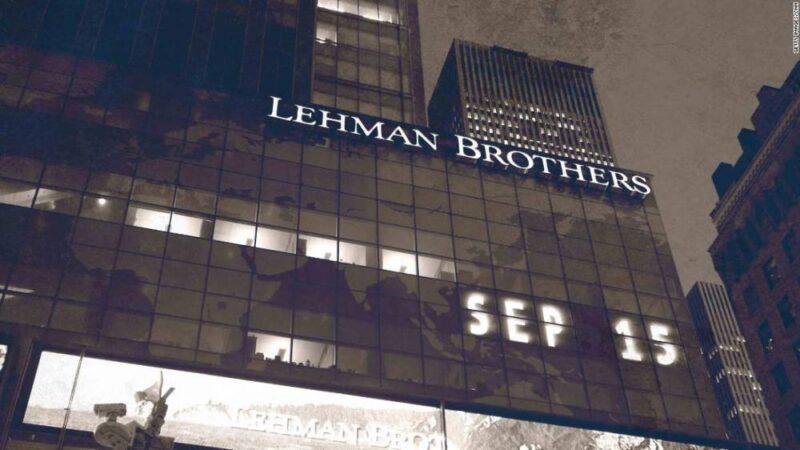 Lehman’s final days were marked by frantic last-minute negotiations over its fate. Right up until the end, everyone thought someone would rescue Lehman Brothers: Surely the firm wouldn’t be allowed to fail. Bear Stearns, a smaller investment bank, had been saved just six months earlier by Washington and JPMorgan Chase. On Wednesday, September 10, South Korea’s Korean Development Bank dropped out of the running to be Lehman Brothers’ white knight. The news — combined with Lehman’s announcement of a record $3.9 billion quarterly loss — sent the bank’s shares cratering 45%. With South Korea out, Treasury Secretary Hank Paulson called Bank of America CEO Ken Lewis to ask him to find a creative way to buy Lehman Brothers. Put on your “imagination hat,” Paulson urged Lewis. But by Friday, September 12, Bank of America said it was bowing out unless the government was willing to help. Lehman was simply stuck with too many “illiquid” mortgage assets, and it couldn’t sell them quickly enough to meet other obligations. Bank of America decided instead to buy the next investment bank in line to fail: Merrill Lynch.”You just didn’t know what was going to happen when you got into work on Monday,” said Brady Kim, who worked as an analyst on Lehman’s trading desk. “Were you going to be working for Barclays? Some Korean conglomerate?”The one option few saw coming was bankruptcy. “They’re not just going to let the bank go under,” Kim said.

That Friday evening, Paulson ordered the heads of the big Wall Street firms to meet at the New York Fed’s headquarters. They were told to come up with a private-sector solution to save Lehman.American officials had little appetite for another bailout. They had just seized control of teetering mortgage giants Fannie Mae and Freddie Mac the weekend before. Fed officials said Paulson made it clear there would be no government help this time, “not a penny.”

I never thought the company would go out of business."

Saturday brought an apparent breakthrough for Lehman: Barclays agreed to buy Lehman — as long as Wall Street would take some assets off its hands. But the Barclays deal went up in smoke on Sunday when UK regulators balked at blessing the risky deal.”Imagine if I said yes to a British bank buying a very large American bank which … collapsed the following week,” Alistair Darling, the UK’s chancellor of the exchequer, later told the Financial Crisis Inquiry Commission.

‘It was pandemonium up there’

With no buyers left, regulators pressured Lehman Brothers to file for bankruptcy on Sunday night, before trading opened in the morning. Lehman’s lawyers and executives left the New York Fed to inform the board that no rescue was coming.”We went back to the headquarters, and it was pandemonium up there,” Harvey Miller, the bankruptcy counselor for Lehman Brothers, later told investigators. The Fed rejected a last-minute Lehman plea for additional assistance from the central bank, leading to the early-morning bankruptcy.The collapse shocked employees. “I never thought the company would go out of business. It was terrible,” said James Chico, who worked as an analyst in the back office at Lehman for more than two decades. Tom Rogers was on his honeymoon in St. Lucia when the bank, his employer for seven years, went bust. “I came back, and it was just mass chaos,” said Rogers, who started as an intern at Lehman and moved up to senior analyst in the firm’s reinsurance business.

The turmoil showed just how fragile and interconnected the entire system was. The situation was exacerbated by the near-collapse of AIG, the insurance behemoth. Regulators feared AIG’s demise would bring down the whole system — so AIG was given a $182 billion bailout.Fear and panic quickly spread through the financial system, causing credit markets to freeze. Even large and iconic industrial companies such as General Motors were unable to receive short-term funding. “The financial crisis reached cataclysmic proportions with the collapse of Lehman Brothers,” the crisis inquiry commission concluded.Fuld, who had infamously told shareholders in April 2008 that “the worst is behind us,” emerged as one of the villains of the crisis. He steered Lehman right into the face of an epic storm. Between 2000 and 2007, Lehman’s assets had more than tripled to $691 billion. And its borrowing ratio, known as leverage, jumped to 40 times its shareholders’ equity in the company. The firm had relatively little capital to protect against trouble.Madelyn Antoncic, Lehman’s chief risk officer from 2004 to 2007, tried and failed to warn Fuld against taking on more mortgage risk. “At the senior level, they were trying to push so hard that the wheels started to come off,” Antoncic told the commission.For his part, Fuld told lawmakers in 2008 that the pain of Lehman’s failure “will stay with me for the rest of my life.”The former Lehman Brothers boss, who made and lost a $1 billion fortune on Wall Street, has made few public appearances since the crisis. He did speak at a 2015 event where he admitted he would do some things differently.”I missed the violence of the market and how it spread from one asset class to the next,” Fuld said. 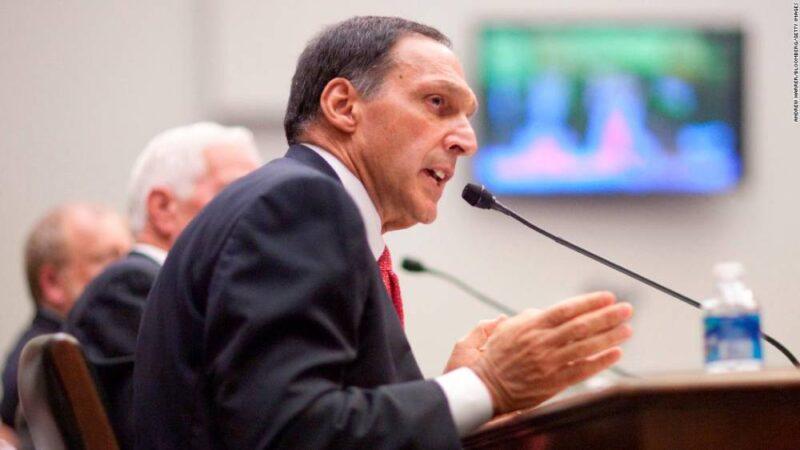 Richard Fuld, former chairman and chief executive officer of Lehman Brothers, speaks during a hearing in 2010.

Where were the regulators?

Fuld doesn’t deserve all the blame. The firm’s demise underscored the wild risk-taking that regulators and CEOs had allowed to become rampant across Wall Street.Consider, for example, the 2000 deregulation of exotic financial instruments known as derivatives. Regulators had little window into how these trades linked banks to one another. When one bank failed, other financial institutions fell in a kind of domino effect. Even a month before Lehman’s bankruptcy, officials at the Fed were still seeking information on the bank’s 900,000 derivative contracts. And they were clueless about the risk posed by AIG’s enormous book of derivatives.”The people charged with overseeing our financial system were flying blind as the crisis developed,” Angelides said. Only in 2010, with the passage of the sweeping Dodd-Frank financial reform law, were derivatives required to be bought and sold on exchanges.Regulators also failed to get Lehman Brothers to slow its headfirst dive into mortgages. The firm kept buying real estate assets well into the first quarter of 2008.The Treasury Department’s Office of Thrift Supervision didn’t issue a report warning of Lehman’s “outsized bet” on commercial real estate until two months before its collapse. The OTS was abolished by Dodd-Frank.

"Our regulatory system is made of humans — and humans make mistakes."

Likewise, the SEC declined to call Lehman Brothers out for exceeding risk limits — even though the agency was aware.”The SEC…knew of the firm’s disregard of risk management,” the commission said.Lehman Brothers also got away with using accounting gimmicks to mask how much money it borrowed. Bart McDade, Lehman’s president and chief operating officer, wrote in an email at the time that the accounting maneuvers are “another drug we R on.”

Should Lehman have been saved?

Economists will debate for decades whether Washington should have rescued Lehman to prevent the chaos that followed. Former Federal Reserve chairman Ben Bernanke maintains that regulators had no authority to lend to a failing Lehman.”We essentially had no choice and had to let it fail,” Bernanke told the commission. But others say Bernanke and Paulson should have realized that allowing Lehman to fail would deepen the crisis. “Our regulatory system is made of humans — and humans make mistakes,” said James Angel, a business professor at Georgetown University. “The Fed clearly could have done a better job of containing the damage.”The inconsistent response by Washington — deciding not to rescue Lehman after saving Bear and before helping AIG — “added to uncertainty and panic,” the financial crisis inquiry concluded.

Could it happen again?

Today’s financial system is safer thanks to the reforms put in place after 2008. Banks have bulked up on vast amounts of capital. Regulators are more vigilant.But some worry about the risk of another downturn, even if it doesn’t start with banks.”I’m concerned about now,” said famed Yale professor Robert Schiller, pointing to “highly priced” stocks and rising home values. “We’re already in for what could be a repeat of 2008,” Shiller said. “It will look different this time, but there could be a decline in home prices and recession coming in.”

Let’s hope the lessons from the last crisis haven’t been forgotten.A Decade Later: It’s been 10 years since the financial crisis rocked America’s economy. In a special yearlong series, CNN will examine the causes of the crisis, how the country is still feeling its effects, and the lessons we have — and have not — learned.