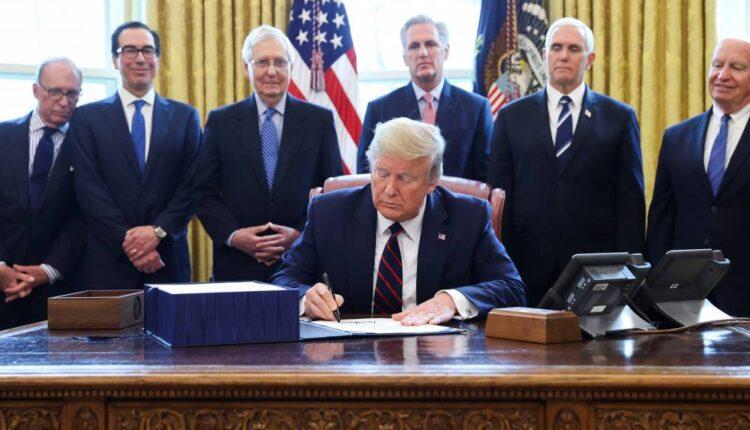 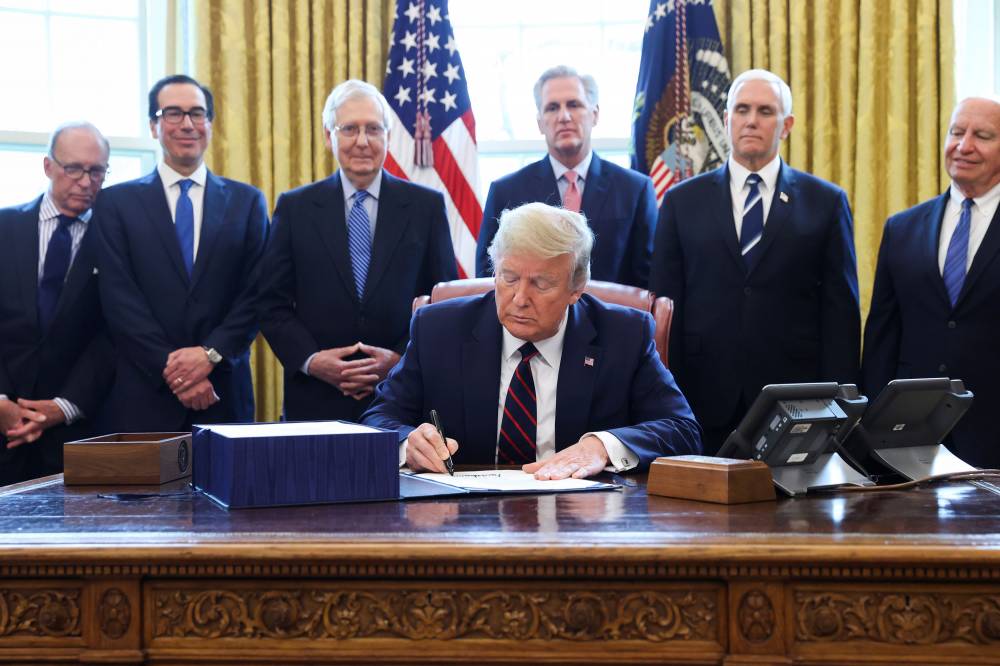 The stock market is in a "tug of war" between bearish and bullish investors as the coronavirus outbreak takes its course in the United States, CNBC's Jim Cramer said Friday.

Wall Street is at a crossroads of heading into a depression or reversing fortunes, depending on how long it takes the country to address the spread of COVID-19, the disease caused by the virus. The major averages all fell as much as 4% in Friday's session, ending the first three-day winning streak in nearly two months on the Dow Industrial and S&P 500 indexes.

"I don't know who's right, but lately I've been feeling a bit more optimistic," the "Mad Money" host said in the wake of President Donald Trump signing a $2.2 trillion stimulus bill.

The economic rescue package will pump money into companies, both large and small, and citizens, both employed and laid off, to weather the crisis. The programs should help strong-arm the economy from falling into a depression, due to government-ordered business closures and isolation mandates.

"This was a go-big-or-go-home moment, and fortunately Congress decided to go big," Cramer said. "I think the stimulus takes a depression, though, off the table," while problems remain.

Still, more needs to be done to address the health epidemic. Hospitals across the country remain in need of ventilators and protective equipment. The White House opted against a nationwide shutdown, which allowed the virus to fester, Cramer said. Big cities that have not taken preventive action to slow the spread could face a situation like New York state, he added.

Of the roughly 101,700 cases in the U.S., nearly half have been diagnosed in New York state and highly concentrated in New York City, according to data from Johns Hopkins University as of Friday afternoon.

Several pharmaceutical companies are working on treatments for COVID-19, which Cramer is banking on will help calm the health crisis.

"But if we fail, I think the market will revisit its lows from earlier this week," Cramer said. "That's why we need to stay in touch with actual earnings with actual companies, so we see what's worth buying" here.

Cramer presented what's circled on his calendar next week. All earnings and revenue estimates are based on FactSet estimates.

RH reports earnings for its fourth quarter after the closing bell.

"I think this is one of those companies that will come back when the pandemic's over because of its incredibly loyal clientele, because of its brilliant management," Cramer said.

McCormick reports results for its first quarter before the opening bell.

"I think PVH needs to tell a good story about Europe to change the narrative. Alas, Europe's having a tough time right now, too," Cramer said. "Let's hear what CEO Manny Chirico has to say."

Walgreens reports results from the fiscal 2020 second quarter before the market opens.

"This stock has fallen to $44 with a 4.2% yield, and I figure it can bounce, but if you own Walgreens I recommend selling the bounce," he said.

"Even if Walgreens somehow reports a good quarter, I don't trust the guidance."

Carmax's fourth-quarter numbers come out in the morning.

"I'm betting this used-car chain has nothing good to say about the future, because the lockdowns are bad for business and keep you at home," Cramer said.

"In a world where you can't go out to shop for pet food, Chewy brings it right to your door," the host said. "Textbook quarantine winner."

"I think it could ignite the whole beer group if it delivers better-than-expected numbers," Cramer said. "Unfortunately, I don't see that happening. They make too much money selling drinks to restaurants — restaurants that are now closed."

Cramer’s lightning round: ‘You do want to buy defense stocks right here’