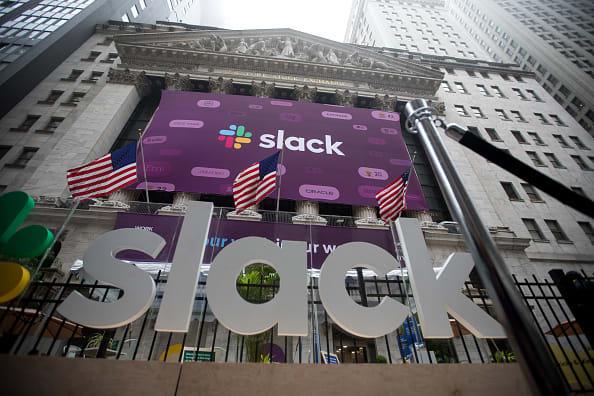 Investors are developing a liking to work-from-home stocks.

With millions of Americans working remotely to mitigate the spread of the coronavirus outbreak, a handful of stocks are poised to benefit from the boom, two market analysts told CNBC's "Trading Nation."

Some have already shown signs of relative strength. While the S&P 500 is down nearly 23% year to date,

"I think there's value across the board in these at better prices," he told CNBC in Friday's interview.

"I'm on Slack every day. I love the product. And take a look at the chart," Baruch added. "It did fail recently. So, that cannot go unnoticed: It did fail a double top."

"So, there's going be a lot of resistance at let's call it $30," the chart analyst said. "But when it does come down here, I think there's a great buy opportunity for the swing trade at about 20 bucks." Slack was trading at $25.50 in Monday's premarket.

DocuSign's stock, which hit a record high last week before cooling off again, is in a similar situation, Baruch said.

"I want to see it at a better price," he said, pointing to a trend line on the chart stretching back to September 2019.

"This alludes to some good value [around] 70, $72," he said. "I would look to see that as a buying opportunity as well. Again, don't feel like you need to chase any of this momentum because the broader trend is a bear market." The stock was at $82.83 in Monday's premarket.

Logitech's chart also suggested there could be opportunities in the stock, Baruch said, spotting another clear buying threshold around $42, nearly $3 higher than Monday's premarket price of $44.67.

"This is an interesting product because it's very high demand right now," he said. "On the other side of it, … some of their items are sold out, you can't get them anywhere, which in turn can hurt return for the company. But overall the chart is very constructive. You have a bull flag pattern, it's broken out north of that bull flag pattern here and there is support at … 42 bucks. I want to be long Logitech above $42 but really, can you get that move and close above 44, 45?"

Gina Sanchez, founder and CEO of Chantico Global, offered some other ways to capitalize on the work-from-home rush.

"Working from home is not easy and it takes a lot of setup, and collaboration software has definitely been on the cutting edge of what is desperately needed," she said in the interview, citing the upward moves in Zoom and Slack's stocks.

"The thing is that neither of these companies has great fundamentals, and if you're looking for good fundamentals, you have other options like Microsoft," she said. "Microsoft Teams does everything that Slack does, and Microsoft as a whole is benefiting from other trends like Azure and the move into the cloud. But you also have an even better-performing option which is Citrix. Citrix offers GoToMeeting, and that has very good free cash flow, very strong fundamentals and operating margins. And so from that perspective, I'd say Citrix is the play."

Overall, Sanchez preferred to play the broader trend of work-from-home via the larger tech players rather than more narrowly focused service providers like Zoom.

"I personally think that the broad trend is the more diversified approach," she said. "If you look at the strongest companies that have great margins, that have more ability to weather the storm if this continues, you're looking at a Microsoft or an Intel. Those are companies that are benefiting very broadly."

Even companies like Dell or VMware are likely less risky than some of the smaller-scale plays, Sanchez said.

"These pure plays that we're looking at, many of them came from the start-up world. They are still struggling with ensuring that they have enough free cash flow," she said. "A lot of these margins are razor thin, and that's the challenge that you're facing."

Out of Slack, DocuSign and Logitech, "Logitech actually has the best sort of fundamental story that I think can weather this storm and it's not nearly as overpriced as the others," Sanchez said. "But you're still looking at a situation where you have to be able to weather this storm, not just for these short-term trends, but for the long-term trends."