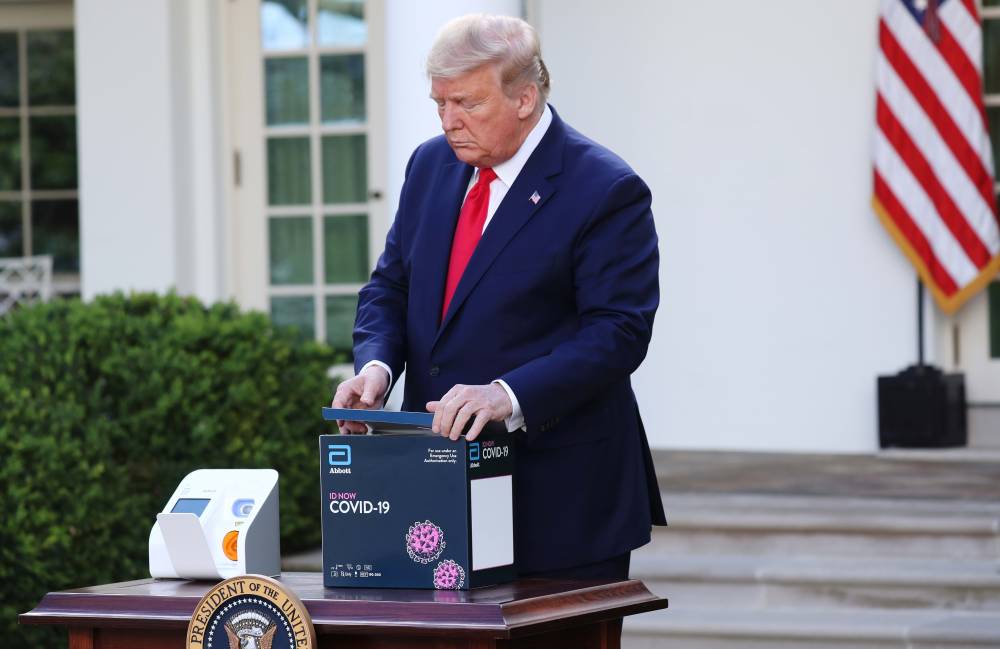 Abbott Laboratories has received federal clearance for two coronavirus tests in as many weeks and the company is on a mission to develop even more diagnostic devices, CEO Miles White told CNBC on Monday.

"I have to say while we're very pleased with the performance that we've been able to deliver here — we've launched two tests in the last couple of weeks — there's still more, and there's a need for more," he said in a "Mad Money" interview with Jim Cramer.

The Food and Drug Administration on Friday gave Abbott Labs, an Illinois-based health-care products maker, emergency use authorization for its point-of-care test called ID NOW COVID-19 that it says can diagnose individuals with the virus in five minutes, the fastest such test available. Another molecular test from Abbott, m2000 RealTime SARS-CoV-2, received emergency use authorization just the week prior, and the company has shipped out 150,000 units.

This week, Abbott is ramping up production of the ID NOW nasal swab test to 50,000 units per day.  Between the two tests, the company is looking to manufacture a total of 5 million per month as health officials try to slow the spread of the deadly disease.

President Donald Trump on Friday heaped praise on Abbott Labs for developing the ID NOW test. But White, who is set to retire on Tuesday, said the tally won't be enough to get the job done. The U.S. has struggled to quickly make coronavirus testing available widely.

"There are more tests coming," he said. The company is "also putting a lot of effort … into capacity expansion because, while 50,000 a day sounds like a lot, it's not enough … and for a while we'll be allocating and prioritizing to high-need areas."

"We know that fighting this virus, and being able to go back to a world that's more normal, is going to require a lot of testing in the right places with rapid turnaround and, fortunately, we have multiple formats to do that with," he said.

White was joined in the interview by operations chief Robert Ford. The Abbott Labs veteran will take over the chief executive seat after White's departure. The longtime chief will stay on with the company as executive chairman of the board.

Ford, who has been with the company for more than two decades, will serve as the 13th CEO in its more than 130-year history and be tasked to lead a workforce of more than 107,000.

Ford said Abbott has worked with the White House to prioritize distribution of the rapid test to health care, police and other workers on the front line of coronavirus response efforts.

"We don't do PPE (personal protective equipment), but we do tests, and we want to make sure that these people are safe so that they can take care of us," he said.

Other Abbott research and development teams are also at work to develop other testing processes, including serology and antibody tests, that will be available in a "matter of weeks to a couple of months," White added.

What happened to the stock market Friday: Stocks ease after 3-day rally

Coronavirus: Cramer says science can prevent economy from a depression