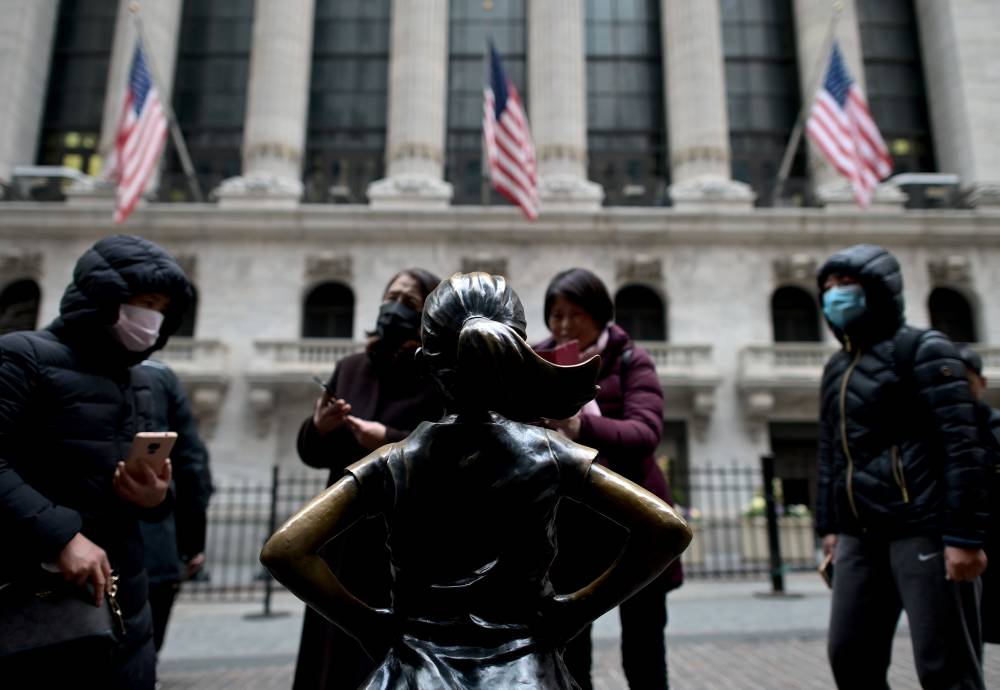 Stocks opened lower on Friday, unable to extend the recent rally that saw the Dow Jones Industrial Average and S&P 500 post their best 3-day win streaks since the 1930s. The Dow fell more than 1,000 points at its session low, although some of the losses were pared late in the afternoon as the House passed the much-awaited $2 trillion stimulus package. But in the final half hour of trading stocks moved lower once again, and the Dow closed more than 900 points lower.

4:20 pm: Economy 'still has some things to get through,' Wells Fargo strategist says

Wells Fargo Investment Institute senior global equity analyst Scott Wren said on "Closing Bell" that actions by the Federal Reserve and Congress helped boost markets this week, but that further help from both may be necessary to help the economy pull out of the coronavirus crisis.

"We do think we'll see positive GDP in the fourth quarter and some better things going on in 2021, but certainly in these first three quarters we're looking for contraction … We have some things to get through, but at least we have a good foundation here that will likely cushion the blow and help us get to the other side," Wren said. — Pound

Stocks posted sharp losses to finish off another volatile week on Wall Street. The Dow dropped 915 points, or 4%. The S&P 500 dipped 3.3%, while the Nasdaq Composite fell 3.8%. Strong performance from earlier in the week outweighed Friday's sharp losses, however. The Dow finished the week with a gain of nearly 13%, while the S&P rose 10%. – Stevens

With roughly one hour left in the trading session, the major averages were down sharply, giving back some of the gains from a strong three-day rally. The Dow was down more than 600 points, or 2.9%. The S&P 500 and Nasdaq Composite both traded 2.3% lower. Investors are also wrapping up another volatile week. The S&P 500 has posted moves of more than 2% in four of the five sessions this week. —Imbert

Oil prices fell on Friday to end the week in the red for the fifth straight week of losses as crude continues to get hit on the supply and demand side. U.S. West Texas Intermediate crude fell 4.8% to settle at $21.51 per barrel. On the week, WTI fell nearly 5%. International benchmark Brent crude also posted a fifth straight week of losses. – Stevens

Stocks pared some of their losses after the $2 trillion stimulus package made it through the House. The Dow Jones Industrial Average is down 467 points, after earlier falling more than 1,000. The S&P 500 and Nasdaq are down 2.1% and 2.2%. – Stevens

The House cleared the massive $2 trillion stimulus bill to provide relief for the economy hurt by the coronavirus pandemic. The spending plan will now be sent to President Donald Trump for signature. He has promised to sign the legislation "immediately." – Li

House members are scrambling back to the Capitol on Friday as one member's opposition to a $2 trillion coronavirus rescue package is set to delay its passage. Rep. Thomas Massie, R-Ky., said he plans to force a typical recorded vote, which could hold up passage for hours as the House needs a quorum of 216 representatives present. In a series of tweets announcing his plan to request a full vote, Massie argued the unprecedented rescue measure spends too much taxpayer money, criticizing Democrats for pushing for changes this week rather than approving an earlier version of the legislation. — Pramuk

12:33 pm: America's department stores can make it as much as 8 months with closed stores, analyst says

With stores temporarily shut due to the coronavirus pandemic — and a slim-to-zero chance of opening in the near future — America's department stores are facing a cash crunch.

Department store chains have enough liquidity to make it about five to eight months, with their stores sitting dark, in this coronavirus pandemic, according to an analysis released Friday by Cowen & Co. It says that is "better than feared" because the firm does not anticipate the temporary store closures will drag on for that long.

In making these assumptions, Cowen is measuring liquidity as cash plus revolvers, relative to key expenses such as rent, labor and promised dividend payments. Cowen said labor costs are about 10% of annual sales, while rent is about 3%, to give a sense of what some of these expenses look like. —Thomas

The Federal Reserve's efforts to keep markets functioning and the economy afloat during the financial crisis have pushed its holdings past the $5 trillion mark for the first time. Through Wednesday, the central bank's balance sheet totaled $5.3 trillion following an aggressive move in which the central bank is buying bonds across the yield curve. One particular area of expansion was in currency swaps, which increased eight-fold over the past week to $206 billion. – Cox

Boeing's stock dropped more than 10% in early trading after U.S. Treasury Secretary Steven Mnuchin said that the company does not intend to participate in a government bailout of aviation companies. "Boeing has said that they have no intention of using a program that may change in the future," Mnuchin said, adding that "right now Boeing's saying they don't need it." – Sheetz

With some investors saying the economy could get worse before turning a corner, RBC identified a number of small cap names that can outperform regardless of the broader economic environment. One such name is pet insurance company Trupanion, which is "close to recession resistant" since "Fluffy needs to be fed AND covered," the analysts led by Mark Mahaney said. The firm has a buy rating on the stock, but did lower its target from $41 to $39. The new target is roughly 40% above where the stock currently trades.

"In the long run, coming out of the COVID/Recession, we would expect improved Brand positioning for TRUP as vets narrow down their choices of insurance providers and Trupanion remains one of their top recommended options," RBC said. The stock has gained 15% this week, but is down 27% this year. – Stevens

10:47 am: Wall Street analysts upgrade stocks on hopes the market has bottomed

U.S. consumer sentiment fell to its lowest level in more than three years as people grow more fearful of the coronavirus outbreak. The University of Michigan's index of consumer sentiment dropped to 89.1 in March from 101 in February. Economists polled by Dow Jones expected a fall to 90. March's decline in sentiment was the fourth-largest in nearly 50 years, according to Richard Curtin, chief economist for the Surveys of Consumers. – Imbert

From Tuesday to Thursday, the Dow and S&P 500 rallied more than 20%. Barclays pointed out that since 1937, eleven bear markets experienced a "head fake" rally, meaning stocks went up, giving investors hope of a rebound, but eventually spiraled downward again when the real economic pain was realized. "Bear market 'head-fake' rallies are not uncommon," Barclays U.S. equity strategist Maneesh Deshpande said in a note to clients. "So if the SPX goes back down below 2237 we would consider this ~18% rally as a 'head fake' since it wasn't the beginning to the actual recovery." Barclays theory is materializing on Friday with the S&P 500 down more than 3%. – Fitzgerald

9:21 am: Lululemon says it won't issue 2020 guidance due to coronavirus uncertainty

Athletic retailer Lululemon said Thursday it won't provide full-year earnings outlook due to uncertainty surrounding COVID-19. Shares of Lululemon fell nearly 4% in premarket trading on Friday. The yoga pants maker did, however, report fourth-quarter earnings and sales that topped analysts' estimates. Same-store sales overall were up 20%, the company said, while online sales surged 41% during the quarter. Men's revenue was up 32%, and women's was up 17%. – Fitzgerald

"If I'm right on the virus call, if I'm right and that's the big 'if' … I think the market at the recent low … was close enough to the bottom to be called the bottom," Cooperman said on "Squawk Box."

The S&P 500 hit its recent low of 2191.86 on Monday, which was about 35% lower than the index's last month's all-time high. "If the economic shutdown goes beyond April into the third quarter, I would be less optimistic," said Cooperman, founder of the Omega Advisors investment firm, which he turned into a family office at the end of 2018. The investor, who made his fortune picking individual stocks, said he sees an S&P range of 2,200 to 2,800 this year. – Stankiewicz

The Cboe Volatility Index rose more than six points on Friday morning to trade above 67. The index, often called Wall Street's "fear gauge," has remained elevated despite the market's sharp rebound over the last three days. The index tracks the future volatility implied by S&P 500 options, suggesting that traders expect choppy trading to continue in the coming weeks. — Pound

8:52 am: KB Home rises 5% in premarket on strong earnings

Shares of KB Home gained 5.7% in premarket trading Friday after the home builder reported strong-than-expected quarterly earnings. The company earned 63 cents per share in its fiscal first quarter, beating consensus estimates by 18 cents, according to Refinitiv. KB Home said it sees a 31% jump in orders and a 28% increase in deliveries during the quarter. However, the company pulled its 2020 guidance given the uncertainty surrounding the coronavirus pandemic. – Li

8:19 am: US has the most cases of coronavirus in the world

The United States now has more confirmed coronavirus cases than Italy and China, making it the country with the largest outbreak in the world.

The total number of cases in the U.S. reached 82,404 Thursday evening, eclipsing China's 81,782 cases and Italy's 80,589, according to data compiled by Johns Hopkins University. Confirmed U.S. cases passed 5,000 last week. At the beginning of the month, there were roughly 100 confirmed cases in the U.S. – Stevens

This map shows the latest spread of reported cases of coronavirus

United Kingdom Prime Minister Boris Johnson announced Friday that he has tested positive for COVID-19. He said in a tweet that he is experiencing "mild symptoms" and is self-isolating. He also said he will continue to lead the UK government's response to the virus. — Pound

7:55 am: Trump says the US and China are 'working closely together' in fight against coronavirus

China and the U.S. are aiming to work more closely as the coronavirus continues to spread, leaders of both countries said in a phone call Friday.

President Donald Trump said in a tweet that he spoke with his Chinese counterpart Xi Jinping "in great detail" about the COVID-19 pandemic, which has so far killed more than 24,000 people globally.

"China has been through much & has developed a strong understanding of the Virus," Trump said on Twitter. "We are working closely together. Much respect!" – Stevens, Cheng

U.S. stock index futures pointed to losses at the open, which would snap stocks' record 3-day win streak. The Dow Jones Industrial Average was set to open more than 600 points lower for a loss of 2.7%. The S&P 500 was also on track to drop 2.7% at the open, while the Nasdaq was poised for a 2.6% decline.

Stocks got a boost after the Senate passed a $2 trillion economic stimulus bill aimed at mitigating the economic damage from the coronavirus outbreak. The House is expected to vote on the bill later today.

"We still have policy room in other dimensions to support the economy," Powell said on NBC's "TODAY" show. "We're trying to create a bridge from a very strong economy to another place of economic strength."

Stocks managed to move higher despite the largest weekly jobless claims number on record. Even with the recent strength, the major averages are still more than 20% below their February all-time high levels. – Stevens