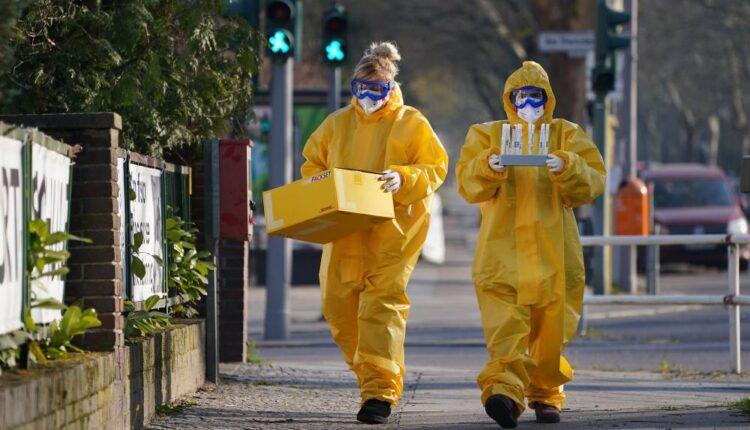 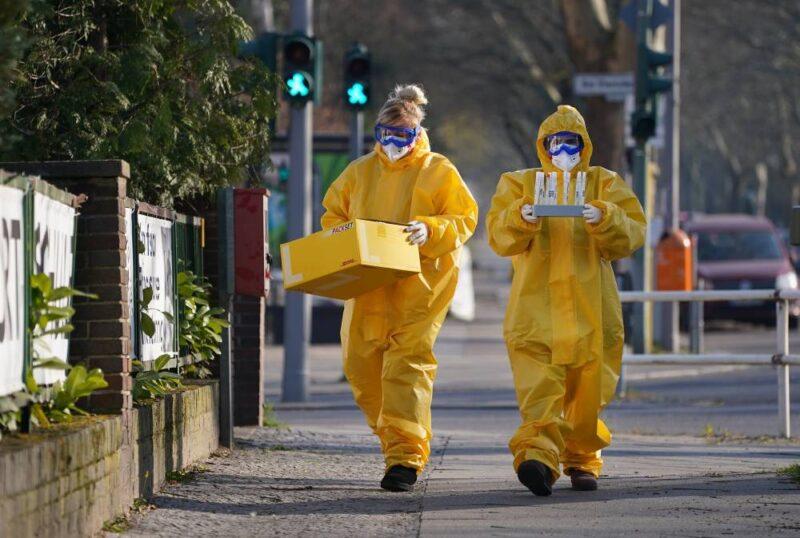 The data above was compiled by Johns Hopkins University as of 1:51 p.m. Beijing time.

China's National Health Commission (NHC) said there were 35 new cases as of April 1, all of which were "imported" from other countries. The mainland had six more deaths, all of them from Hubei, the epicenter of the outbreak, said the commission.

2:41 pm: European Union will allocate up to $109.6 billion to hardest-hit countries

She also called for more solidarity among EU members to fight the crisis, the report said. She added that many countries had focused on their own problems in the early days of the crisis, which "was harmful and could have been avoided," according to the report. — Yen Nee Lee

China's domestic travel industry is poised to resume normal activity before the summer holiday season, according to the CEO of the country's largest travel site Trip.com.

Jane Sun told CNBC she was hopeful her company could forge the path to recovery for one of the industries hardest hit by the coronavirus pandemic.

"We are confident, with the government's strong control measures, we'll be able to lead the recovery within China," Sun told "Street Signs" on Wednesday. — Karen Gilchrist

Total deaths in the U.S. related to the coronavirus reached 5,138, according to data compiled by Johns Hopkins University. New York City recorded the highest number of fatalities at 1,374, the data showed.

The U.S. has the most number of reported cases globally. — Yen Nee Lee

The Mexican government said the economy could contract by as much as 3.9% this year due to the pandemic, Reuters reported, citing the country's finance ministry.

Those forecasts "incorporated the effects of a drastic shock on the economic scenario of Mexico and the rest of the world, derived from the pandemic," the finance ministry reportedly said. — Yen Nee Lee

1:14 pm: For some Chinese businesses, there's no going back to life before virus outbreak

As the second quarter begins in China, it's an altered landscape in the coronavirus-stricken economy with businesses that remain shut — some for good.

The official resumption of work rate has crept steadily higher since early February, when more than half the country extended a Lunar New Year holiday by at least a week in an effort to limit the spread of the disease known officially as COVID-19.

As of March 29, small and medium-sized enterprises nationwide had resumed work at a rate of 76.8%, up from around 60% about two weeks earlier, according to the Ministry of Industry and Information Technology's monitoring of about 2.2 million smaller businesses' use of cloud computing platforms.

But it's unclear how quickly or whether that figure can reach 100%. — Evelyn Cheng

12:46 pm: Indian automaker Maruti Suzuki made 'no sales' since lockdown

If the coronavirus pandemic did not occur, demand for automobiles in India would have steadily grown over the course of the year, according to a top industry leader in the country.

The initial number of cases in India appeared to show that the situation was contained, but as the number of infections grew, it prompted Prime Minister Narendra Modi to announce a 21-day national lockdown that began last Wednesday.

"The lockdown has meant that all the automakers, including Maruti, have had to close the factories and stop production completely. We've shut down our service stations, our sales outlets, and the dealerships," R.C. Bhargava, chairman of Maruti Suzuki, told CNBC's "Street Signs." — Saheli Roy Choudhury

That brought the total number of cases in Germany to 73,522, with 872 fatalities, said the institute. — Yen Nee Lee

Philippine President Rodrigo Duterte warned in a televised address that violators of the country's lockdown measures could be shot dead, Reuters reported.

"My orders to the police and military … if there is trouble and there's an occasion that they fight back and your lives are in danger, shoot them dead," Duterte reportedly said.

"Is that understood? Dead. Instead of causing trouble, I will bury you," he added.

The Philippines has reported 2,311 confirmed coronavirus cases as of Wednesday, said its Department of Health. — Yen Nee Lee

Israeli health minister, Yaakov Litzman, and his wife were diagnosed with the coronavirus, reported Reuters.

The couple are now in isolation, the report said. Litzman is an ally of Israeli Prime Minister Benjamin Netanyahu and has regularly appeared alongside the premier to give updates on the virus spread, according to the report. But in recent weeks, the health minister reportedly scaled back his public appearances.

Netanyahu tested negative for the virus earlier this week after an aide was diagnosed with COVID-19.

There were 89 new cases of infection in South Korea and four more people died, according to the Korea Centers for Disease Control and Prevention.

South Korea's total cases are just shy of hitting 10,000; the current figure stands at 9,976 and 169 people have died. Mass testing and rigorous efforts to isolate infected patients have relatively slowed down the spread of the virus within the country. — Saheli Roy Choudhury

10:55 am: Australia says it will provide free child care for some families during coronavirus pandemic

Australia will provide free child care for around one million families during the coronavirus pandemic under a plan from Prime Minister Scott Morrison's government.

As part of the plan, the government will pay 50% of the sector's fee revenue up to the existing hourly rate cap before parents had started withdrawing their children in large numbers. The caveat is that the services need to stay open and not charge families for care. The measure will apply from April 6 based on the number of children who were in care during the fortnight leading into March 2, whether or not they are attending services.

"These services are vital for so many parents so they can provide for their family, and children need as much familiarity and continuity as we can help provide at this unsettling time. Priority will be given to working parents, vulnerable and disadvantaged children that need early education more than ever and parents with pre-existing enrolments," Morrison said. — Saheli Roy Choudhury

10:07 am: Japan may consider support to increase ECMO machine production

It would be part of an economic package to deal with the coronavirus pandemic, Reuters said.

ECMO machines are used in potentially life-saving treatment for coronavirus patients. They can directly pump oxygen into a person and remove carbon dioxide at the same time.

Japan has more than 2,000 reported cases of infection, according to JHU data. — Saheli Roy Choudhury

Singapore's health ministry said a 68-year-old Indonesian man died on April 2 at 6:43 a.m. local time due to complications from COVID-19. The patient was a work pass holder in the city-state and had been in Indonesia from Jan. 20 to March 16.

He was admitted to the National Centre for Infectious Diseases on March 22 and was diagnosed with COVID-19 on the same day. The ministry said he had a history of diabetes and hypertension.

Los Angeles mayor Eric Garcetti said on Wednesday that residents should wear face coverings or homemade masks when out in public.

Although the CDC does not currently recommend that healthy people wear masks, an increasing number of officials are recommending them to Americans to slow the spread of COVID-19. Garcetti said he expected the official advice to be updated soon. Earlier on Wednesday, President Trump said that people could wear scarves to cover their mouths.

"I think it is time for us to do this," Garcetti said. "I know it will look surreal, we don't have that cultural tradition of wearing masks."

Garcetti added that the city has approved 146 businesses which will make 2 million non-medical face masks per week. — Kif Leswing

"We are so grateful to Apple for this much-needed gift of critical PPE supplies," Cuomo tweeted. PPE refers to personal protective equipment that medical workers need in order to tend to sick patients.

Apple CEO Tim Cook previously said the company had sourced and donated 10 million masks to the medical community in the United States. The masks are in short supply as medical professionals ask for additional equipment to protect themselves while they treat patients who may have COVID-19.

8:20 am: White House advisor Fauci says coronavirus vaccine trial is on target and will be 'ultimate game changer'

The first human trial testing a potential vaccine to prevent COVID-19 is "on track" with public distribution still projected in 12 to 18 months, White House health advisor Dr. Anthony Fauci said Wednesday. It would be the "ultimate game changer" in the fight against the pandemic, he said.

U.S. health officials have been fast-tracking work with biotech company Moderna to develop a vaccine to prevent COVID-19. They began their first human trials on March 16.

"It'll take a few months to get the data to where we'll feel confident to go to the phase two, and then a few months from now, we'll be in phase two and I think we're right on target for the year to year-and-a-half," Fauci said at a White House press conference with President Donald Trump's coronavirus task force. — Noah Higgins-Dunn

Based on the latest reported figures from the health ministry, Singapore now has 1,000 recorded instances of COVID-19 infection. The city-state had been praised for its handling of the crisis in January and February by implementing strict measures to quarantine suspected cases and contact tracing for potential exposure to the coronavirus.

Social distancing markers are seen at a cafe outlet as authorities implement a social distancing measures to combat the coronavirus on March 28, 2020 in Singapore.Suhaimi Abdullah | Getty Images

But, the number of cases in Singapore has grown in recent weeks as more residents returned from abroad and tested positive. As of April 1, noon local time, the country reported 74 new cases of COVID-19 infection, of which 20 were "imported," 29 were linked to previous clusters and 25 had no apparent links discovered yet.

Three people have died from the disease in Singapore;  245 patients have been discharged and another 291 remain clinically well but isolated as they still test positive for the virus. — Saheli Roy Choudhury

As many as 932,605 cases of coronavirus infection have been recorded around the world and at least 46,809 people have died, according to the latest information compiled by Johns Hopkins University. The United States reported the most number of infections at 213,372, while Italy's death toll remains the highest for a single country at 13,155. At least 193,177 people appeared to have recovered.

Italy and Spain each have reported more than 100,000 infection cases as the coronavirus pandemic shows few signs of abating. — Saheli Roy Choudhury

President Donald Trump said that he spoke to Walmart CEO Doug McMillon and put in a "big big order" for gowns.

"Let it be shipped directly to the side of the hospital because we save a lot of time when we do that," Trump said.

Doctors, nurses, and healthcare workers around the country have called for more "PPE" or personal protective equipment like gowns and facemasks to protect them from the coronavirus while working at hospitals. — Kif Leswing

President Donald Trump said that he has not received any intelligence reports showing that the Chinese government had underreported the number of coronavirus cases and deaths in the country.

"I'm not an accountant from China," Trump said when asked at a White House press briefing whether China's numbers are accurate.

Still, Trump said that Beijing's tally appeared "to be a little bit on the light side, and I'm being nice when I say that, relative to what we witnessed and what was reported."

The president's remarks came hours after a news report said the president did receive a secret intelligence brief noting that China deliberately underreported the extent of its COVID-19 outbreak. — Tucker Higgins, Kevin Breuninger

Jim Cramer: Investors can ‘learn a lot’ from Q1 winners and losers