New York (CNN Business)On a typical Saturday night at 2 am, thousands of people are dancing inside the Brooklyn nightclub Elsewhere — all while scores of bartenders, barbacks, bouncers, cleaners, lighting and sound designers are working to keep it running. But last Saturday night, and for the next unknown number of Saturday nights, Elsewhere was empty.

The club’s bills are still coming due. So are the rents of the nearly 100 people on staff, some of whom make most of their income in tips. And many others are in the same position as Elsewhere. The businesses immediately affected by coronavirus — hotels, arts, food, nightlife — employ many people who cannot work from home. If they don’t show up, they don’t get paid.

When New York City banned gatherings of 500 or more people earlier this month, it was the first step in several to where we are now: 100% of non-essential workers have been mandated to stay home by New York Governor Andrew Cuomo to slow the spread of coronavirus.”That was really like Friday the 13th — Day One of the very immediate crisis that nightlife is facing,” said Dhruv Chopra, co-owner of Elsewhere. “In terms of lost revenue, we’re looking at easily two, three months just completely wiped out.”Read MoreCNN spoke to several people who work across New York City nightlife, an ecosystem that supports jobs for almost 300,000 people and generates about $35 billion in economic activity annually.They all acknowledged the closing of bars and restaurants is necessary to slow the pandemic. But they say they’re waiting for what they see as the second half of that policy: for the government to step in and support its workers while cashflow is at zero.

‘Our industry collapse[d] in the space of 24 hours’

Kip Davis, a freelance lighting designer, said he watched as the virus crushed the nightlife industry in Asia, then in Europe, knowing it would inevitably come to the United States.In early March, his colleagues started checking in with each other. They talked about their fears of unemployment, canceled gigs and “when was going to be our last opportunity to make a few bucks before all this was going to come crashing down on us.”Not only have Davis’ event jobs evaporated, but so have his gigs creating permanent installations for bars — because owners are now worried they won’t be able to pay rent. It’s part of a chain reaction that’s touched everyone from bouncers to club owners. 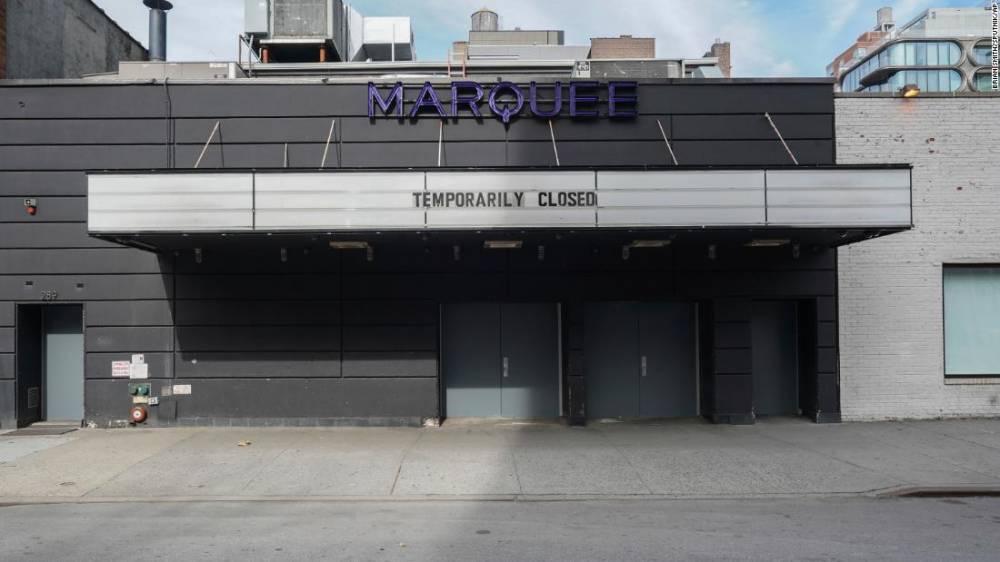 Marquee, a nightclub in Manhattan’s Chelsea neighborhood, has temporarily closed as New Yorkers have been advised by the state and the city of New York to stay home and practice social distancing in reaction to the coronavirus epidemic. “I feel like we watched our industry collapse in the space of 24 hours. So panic ensued,” said Frankie Decaiza Hutchinson, a booker at Bossa Nova Civic Club in Brooklyn. Hutchinson is also the founder of Discwoman, an agency representing DJs who are mostly black and women of color. Both streams of income have stopped, and she’s living off savings. “I mean, there’s just no cash flow, between venues, promoters, artists,” she said. “It’s really hard to know how to pick up after this, honestly. What is going to be left?”Some bars are paying workers a stipend or sick leave, or raising money for them online through GoFundMe and Patreon. “If they’re employed somewhere, maybe that business might be looking out for them,” Davis said. “But if they’re self-employed, there’s nobody who has their backs.”Seva Granik, an independent event planner and party promoter in Brooklyn, said he and his peers are “all entirely out of any way of creating income.” He immediately lost $15,000 he’d invested in events that are now canceled.For John Barclay, it’s 2008 all over again. Until that financial crisis, he was mostly working in journalism and publishing. “Then the recession hit, and I had a part-time bartending gig and I just completely moved over to bartending and bar management because it seemed a lot more recession-proof.”He opened Bossa Nova Civic Club, a small dance club, seven years ago. “Of course, I at the time was not considering pandemics at all,” he said. Barclay said he laid off the dozen people on his staff so they could quickly apply for unemployment insurance.

A lot of people are in the same position as Barclay’s workers. Almost 3.3 million Americans applied for unemployment insurance the week ended March 21. That’s the highest number since the Department of Labor started tracking it in 1967.New governmental assistance programs are meant to help. But the math doesn’t work in a city like New York, where one in four people spends 50% or more of their income on rent. On the local level, New York state has suspended eviction proceedings, and New York City announced small business loans with zero interest and grants for businesses with less than five employees to keep paying them at 40% of wages.Nationally, the White House and Congress are working on a $2 trillion stimulus package that includes $1,200 direct payments to individuals who make up to $75,000, and $2,400 to married couples making up to $150,000, plus $500 per child. The payments decrease for people making more and stop for people making over $99,000 and couples making over $198,000. But in a city with high housing costs, $1,200 won’t go far. “That thousand dollars disappears in a matter of hours because my rent is more than a thousand dollars,” said Granik, the party promoter. “What am I going to do for food for the next few months? What am I going to do for utilities for the next few months?”The package also provides for unemployment benefits for four months and extends it to the self-employed, like Davis. But Davis said he still has many questions, like how the overwhelmed state labor department would handle all the claims. And he still wants a rent freeze — he’s able to delay paying his rent, but not indefinitely. Davis said his landlord told him to go work for Amazon.But warehouse temp work and online fundraisers can’t make up for the systemic problems made more obvious by the pandemic and the proposed aid package when it comes to nightlife workers.”Wealth is not spread out evenly in the city or in the world in general,” Hutchinson said. “We’re really going to see the results of that income inequality come to light during a crisis like this. Who’s going to be left behind? Who’s going to slip through the cracks?”

Beyond the economic issues, she added, there’s a cultural aspect at risk. “These spaces are the community grounds for people to connect and bond and feel safe with one another,” Hutchinson said.

How governments are using text alerts to fight the coronavirus pandemic