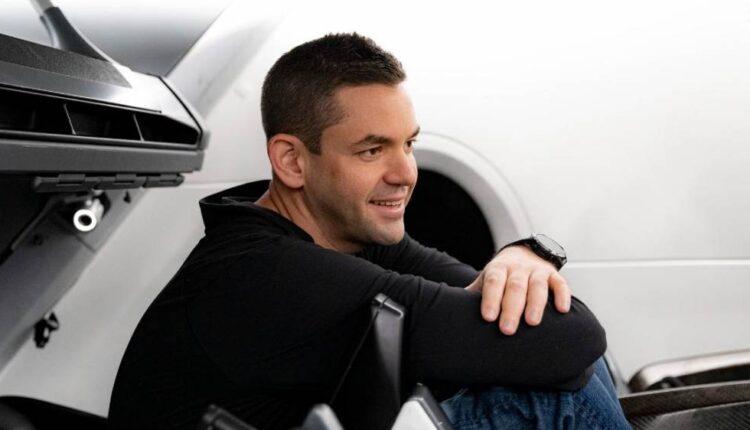 New York (CNN Business)For centuries, a setting sun has signaled the end of fasting rituals on holidays such as Ramadan and Yom Kippur, a cue to tuck into a delicious meal after a full day of deprivation. But what if the sun’s clockwork were to suddenly change, as it does for astronauts riding aboard the International Space Station, which whips around the Earth at 17,000 miles per hour, giving passengers 16 sunrises and sunsets each day?

If the proposed future of millions of people living and working in space — as it has been proposed by the billionaire space entrepreneurs such as Elon Musk — comes to fruition, it’ll be far more than just a few NASA astronauts grappling with how to observe their sun-centric religious practices.Jared Isaacman, the business owner who is preparing climb aboard a SpaceX Crew Dragon to become the first space tourist to fly to orbit from US soil on September 15 said that, although he is Jewish, he doesn’t plan to observe Yom Kippur, which begins at sundown the day of his launch. 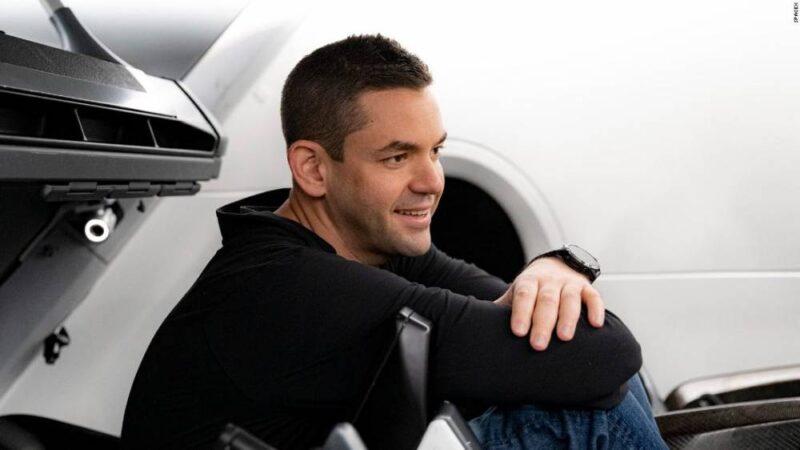 Jared Isaacman in December 2020.”To be very honest, I’m actually not a religious person,” he said, acknowledging that he has been a contributor to a local synagogue in New Jersey.

But if space tourists of the future choose to observe Yom Kippur — a day of fasting, repentance and worship — in space, they might have to grapple with deep theological questions.Read MoreThe history of observing religious practices — however awkwardly — from the confines of a hypersonic spaceship is actually decades long and full of rich anecdotes.

Religion in space: A history

Astronauts and religious leaders attempted to imbue extraterrestrial pursuits with spiritual significance from the earliest days of spaceflight. During NASA’s Apollo 8 mission in 1968, the astronauts conducted a reading of Genesis, the first book of the Bible, on their way to orbit the moon. Buzz Aldrin, who was with Neil Armstrong during the first moon landing in 1969, also quietly took communion from the Eagle lunar lander — taking a sip of wine and a bite of bread blessed by his Presbyterian minister back in Houston — just before the men took humanity’s first steps on the moon. In 2007, Malaysian astronaut Sheikh Muszaphar Shukor became the first practicing Muslim to stay on the International Space Station, and the Islamic National Fatwa Council of Malaysia even issued special guidelines specifically to guide his and other future Muslim astronauts’ practices. Though his flight coincided with Ramadan, the council said his fasting could be postponed until he returned to Earth or else he could fast in accordance with the time zone of the place he was launched. He was also relieved of the obligation to attempt to kneel while praying — a difficult feat in zero gravity. And attempting to face toward Mecca, the holy land in Saudi Arabia, as Muslims must during Salah, or daily prayer, was left up to his best abilities, per the Fatwa Council guidelines. 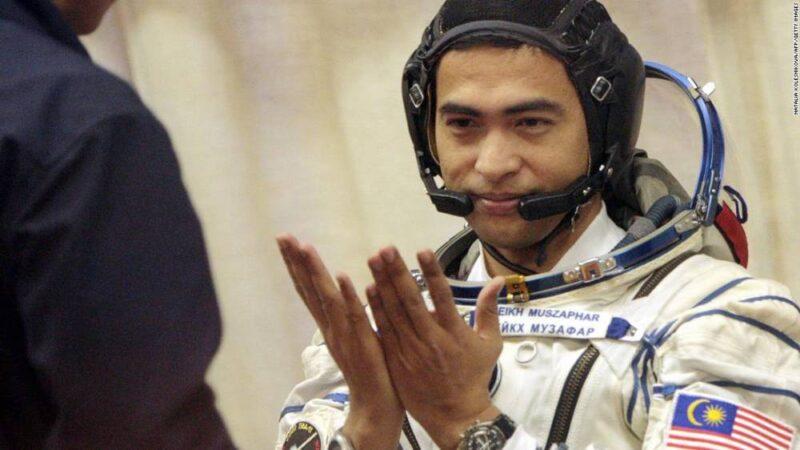 Sheikh Muszaphar Shukor, Malaysia’s first astronaut, shown taking part in a farewell ceremony at the Baikonur cosmodrome, in Kazakhstan, on October 10, 2007 before lifting off for the International Space Station with Russian cosmonaut Yury Malenchenko and American Peggy Whitson. Jewish scholars have proposed similar ideas. Not all Jewish astronauts have attempted to observe Shabbat, the Jewish day of rest, which falls on Saturday, during which Jews are supposed to refrain from all work activity. But Israeli astronaut Ilan Ramon did attempt it in 2003, when he flew aboard a Space Shuttle mission and, in keeping with advice from “leading rabbinical experts,” he observed Shabbat in accordance with Cape Canaveral, Florida time, the place from which he had launched. Among the other religious observances that have taken place on board the 20-year-old ISS are annual Christmas celebrations and the Jewish holidays of Passover and Hanukkah — including a memorable 1993 episode in which NASA astronaut Jeffrey Hoffman broadcast himself spinning a dreidel in microgravity on national television. “It’s a little game — a dreidel — and it’s something that you spin, and then you see which side comes up. And according to that, you either win or lose and I was just trying to see how you might reinterpret the rules for spaceflight since there’s no up or down,” he explained to the camera. 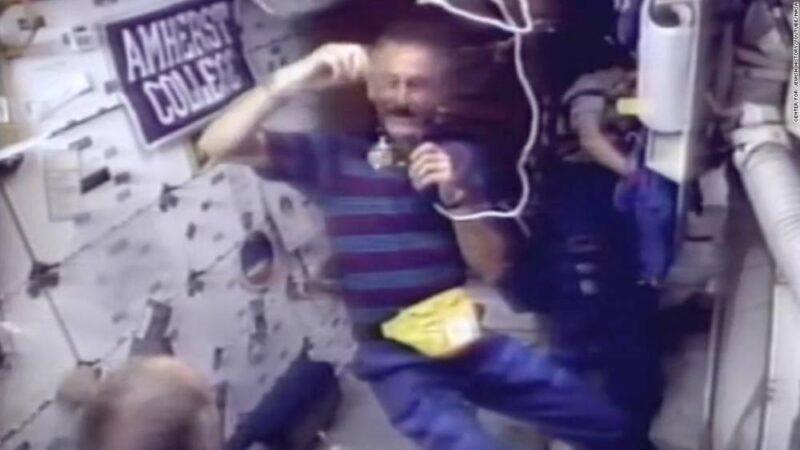 Jeffrey Hoffman, NASA’s first Jewish male astronaut, seen spinning a dreidel during a shuttle mission in 1993.As far as what theology says about how Jewish astronauts should observe Yom Kippur in space, there have not been any formal directives and — in fact — it’s sparked disagreements among some rabbis and religious scholars. For centuries, rabbis have grappled with the dilemma of how to celebrate timely holidays when the sun and the moon aren’t adhering to the norms that most humans are familiar with. A responsum, or a rabbi’s written response to a question about Jewish law, from Rabbi David Golinkin, president of the Schechter Institute of Jewish Studies in Jerusalem, written in 2002 goes through some of the various arguments. A rabbi from the 18th century, Jacob Emden, was naturally not familiar with space travel, however he was familiar with the concept of traveling so close to the Earth’s North or South Pole that a traveler might not see a sunset for months. His resolution was to simply count “days” as one normally would at lower latitudes, by marking the passage of 24 hours. Another Rabbi from the 19th century, Israel Lifshitz, stated that if a traveler has a watch that shows the time at their point of origin, they should observe holidays according to that time.But faced with the modern-day issue of space travel, Golinkin wrote that NASA astronauts should set their watches to the U.S. Central time zone of Houston, Texas, since that is where most NASA astronauts are based.(The Inspiration4 crew is launching out of Florida, and presumably, if timed religious observance was an issue for any of them, they would then stick to the U.S. Eastern time zone.)On the other hand, Rabbi Dovid Heber, writing for kosher certification organization Star-K in 2007, simply says that “ideally, one should not travel to outer space.” But, “if one must go,” there are a number of different options that would satisfy the religious requirements. Heber does note, however, that it is theoretically possible to stretch what should be a one-day holiday into three days, depending on exactly where the spacecraft’s orbit lies.The rabbi of the synagogue Isaacman has supported, Eli Kornfeld of Hunterdon, New Jersey, told CNN Business that he agrees with Golinkin’s assessment. If he were one day living in space, he would still observe Yom Kippur fasts in accordance with Earth-based clocks. Though, he added, he would probably do everything in his power to avoid being in space during such an important Jewish observance. On Yom Kippur, Jews are not supposed work and typically avoid using electricity, driving cars or riding in airplanes.

Still, Kornfeld said, he acknowledged that if, one day, millions of people are living and working in space, the Jewish faith would evolve and adapt with the circumstances. “I think one of the most beautiful things about Judaism — how it’s able to be relevant, and to adapt to all sorts of changing technologies and industry and discoveries,” he said.

Car prices are about to soar again. Blame Hurricane Ida

Mega mansion once worth $500 million defaults on $100 million in…