Automakers are racing to make ventilators. But it’s not that easy

(CNN)US automakers have come to the rescue when the nation has faced supply shortages during wartime in the past. Ford built heavy bomber airplanes and GM built amphibious assault craft, among other things. So it seems only natural that, in the rush to address the critical shortage of ventilators in the US due to the coronavirus pandemic, automakers would again be among the first to answer the call to help.

So far Ford, GM, Toyota and Tesla, which have all temporarily shut down their factories in recent weeks, have pledged to help.On Friday, President Donald Trump announced he was invoking the Defense Production Act to require GM to “accept, perform, and prioritize” federal contracts for ventilators. That should help expedite things. But switching from cars to ventilators is not so easy. Ventilators are complex machines that use sophisticated software and specialized parts, and companies that seek to manufacture them face several hurdles — including intellectual property rights, the need for specially trained workers, regulatory approvals and safety considerations. So far, automakers have announced they’ve been teaming up with existing ventilator makers to help them ramp up production. And some, like Ford (F), and GM (GM), are exploring producing ventilators in their own factories.Read MoreBut it’s a race against time.

Already, sick patients are overwhelming hospitals in New York. The state fears it is headed for a situation like the one that played out in Italy, where ventilator shortages forced doctors to choose which patients get to use the potentially lifesaving machines.”The number of ventilators we need is so astronomical,” New York Governor Andrew Cuomo said Thursday, adding that hospitals have resorted to using experimental solutions, such as putting two patients on one machine.There are about 160,000 ventilators available in America but as many as 740,000 could be needed, according to the Johns Hopkins Center for Health Security.Ventilators can help some of the most seriously ill COVID-19 patients who start losing the ability to breathe on their own. The devices offer gentle breathing assistance so a person’s lungs can rest while they fight the virus.

Not all ventilators are exactly alike. Some are more complex than others. The sickest COVID-19 patients’ lungs can stiffen, requiring high-end machines that cost up to $50,000. Those machines can be precisely tailored for patients and must be operated by trained medical professionals. Production and assembly of these high-end devices are best left to traditional ventilator manufacturers, according to Vafa Jamali, a vice president at Medtronic, which is one of only a handful of companies that manufacture ventilators. Key components are made in-house by experienced workers. Medtronic said. Not only does it not want to outsource that production, but auto makers aren’t capable of making these high-end machines — at least not quickly.”Because this is a lifesaving device, it can’t be off. Practice and experience making the parts is really, really critical,” Jamali said. 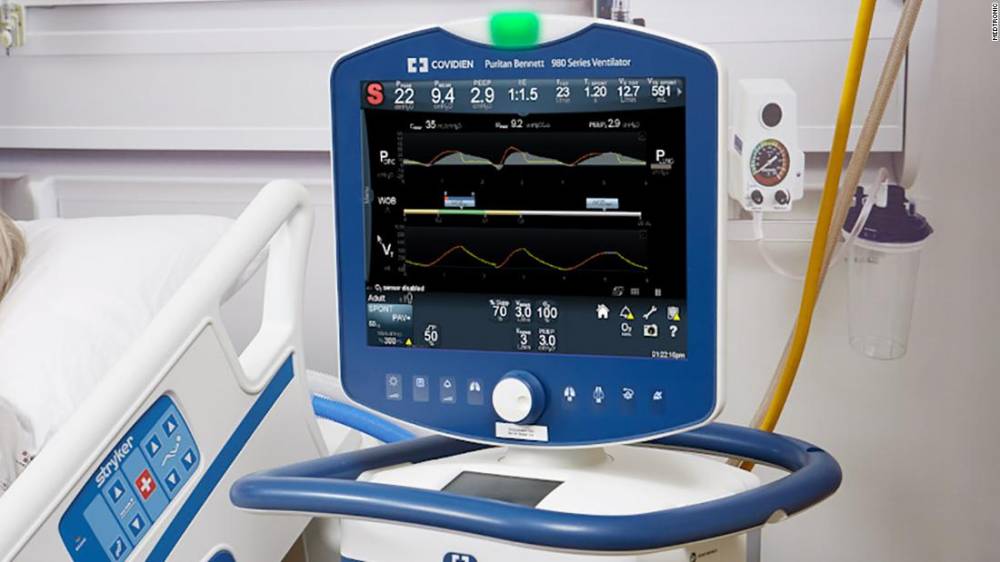 One of Medtronic’s premium ventilator machines. Some of its components are highly specialized, and, the company says, require trained in-house workers.On its own, Medtronic said it has already boosted its weekly ventilator production by 40% since January, in part by putting its assembly lines on a 24-hour schedule. And the company plans to ramp up production by another 200% over the next several weeks by doubling the workers on existing production lines.

Its goal is to ramp up output of top-of-the-line ventilators to 500 per week, a five-fold increase.Still, the company will only be able to manufacture ventilators by the hundreds — and doctors need them by the thousands.That’s why the company says it is welcoming ideas from automakers to help fill the gap.Medtronic has spoken with Tesla, GM and Ford, though the companies don’t have any formal plans to work together yet, Medtronic told CNN Business.General Motors (GM) said last Friday that it was working with another ventilator maker, Ventec Life Systems, to help increase Ventec’s production. The companies are ramping up to produce as many as 10,000 units a month or more, they said in a later announcement. Some of the ventilators will be built in GM’s Kokomo, Indiana, electronics assembly plant. The first of these ventilators are expected to be delivered in April, the companies said.The New York Times reported late Thursday that the White House was about to announce the venture between GM and Ventec, which the report said would allow for the production of as many as 80,000 ventilators. But the Federal Emergency Management Agency said it needed more time to assess whether the venture was too costly.GM responded to the report in a statement, saying “efforts to set up manufacturing capacity at the GM Kokomo facility are already underway to produce Ventec’s critical care ventilator.” It also said it had begun hiring workers for the venture.For its part, Ford has announced it is working with GE Healthcare to increase production of GE’s ventilators.

Jim Baumbick is the vice president in charge of all of Ford’s vehicle product lines, but lately he’s turned his attention to gearing up healthcare technology production.He said Ford, which introduced mass production to the auto industry, has identified efficiencies that can be made to GE’s production processes that will increase output in coming weeks. Ford has also been able to find additional suppliers for some parts that make up the ventilators, Baumbick said, so that GE doesn’t face bottlenecks in its supply chain.The automaker has even suggested changes to parts so they could be more easily produced by other suppliers. GE Healthcare declined to provide additional details about its work with Ford, but did say it is planning to double its output by the end of June.Toyota is also “finalizing agreements to begin working with at least two companies that produce ventilators and respirators to help increase their capacity,” the company said Friday in an emailed statement. Toyota did not say which medical device companies are involved.

Medtronic makes less complex ventilator machines for the less critically ill as well, and the firm is considering making “one or two” of its designs open source. That would allow outside manufacturers to take over production of fully functioning machines. Jamali said he is confident automakers could get the job done. But, he added, “the question is: What is the time frame of when you start and when you’re meaningfully putting ventilators on the market?” Jamali said.

As part of its partnership with GE Healthcare, Ford is helping to design a new, simple ventilator that would be relatively easy to produce, Baumbick said. To do this, Ford and GE designers are starting with a machine used for anesthesia. It’s a machine that, at its core, is a sort of ventilator. The idea, Baumbick said, is to strip away anything that isn’t needed for breathing.”It’s kind of getting down to first principles,” Baumbick said. 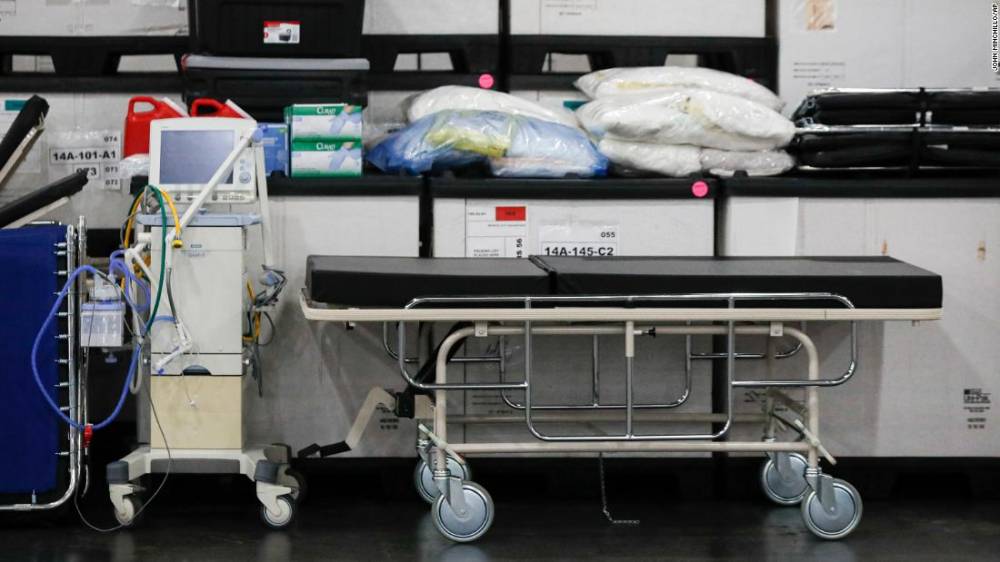 Medical supplies were displayed at the Jacob Javits Center before a news conference with New York Gov. Andrew Cuomo.Once that machine has been successfully designed, he said, it could be manufactured at a facility outside of GE. It could even be made at a Ford factory, he added. But the companies did not give a timeline for when that production could begin. The Food and Drug Administration says it has implemented drastic regulatory changes to allow automakers and other non-medical manufacturers to quickly take up such tasks.”FDA’s message is clear,” the agency said in a March 22 statement. “If you want to help expand production of ventilators to save American lives in this pandemic, we are going to work with you to sweep every possible barrier out of your way.”For example, the agency said it is not enforcing rules that require ventilator manufacturers to gain FDA approval before making slight changes to their devices. That approach “will help manufacturers that want to add production lines or manufacture at alternative sites [that] may have different manufacturing equipment,” according to the FDA guidance.

But some traditional manufacturers remain cautious about working with third parties. If there is a flaw in production, “it would be a catastrophe if you got those devices out en masse,” said Jamali. “You could cause a lot of damage in the patients that are most acute.”Intellectual property rights may also present obstacles. Designs for ventilators, their software or key components are often patented or involve trade secrets. The medical device industry has “historically been extremely sensitive about protecting its intellectual property,” said Debbie Wang, a Morningstar analyst who covers Medtronic. “And I can’t imagine that would necessarily go away,” she added — even in the face of a pandemic.Patrick Keane, an IP attorney that works with hospitals and ventilator manufacturers, agreed that intellectual property concerns could make traditional manufacturers hesitant to work with third-party manufacturers.The Defense Production Act is the most powerful tool the government has to ensure that doesn’t happen. Invoking it allows the White House to direct production. It will be up to the companies who are given ventilator manufacturer directives to ensure they aren’t liable for patent infringement after the crisis passes, according to Keane.The president was under growing pressure to use his DPA powers in order to better coordinate the production and distribution of badly needed ventilators. Doing so, proponents argued, would alleviate the concerns of state governors, such as New York’s Cuomo, who are desperate for new ventilators.But the issue will continue to come back to a major supply gap and a race against the clock. Current ventilator production levels fall far short of demand — and setting up new production lines is no simple task.”You don’t want people who are producing air conditioning units for cars to all of a sudden start producing entire ventilators,” he said.

How governments are using text alerts to fight the coronavirus pandemic