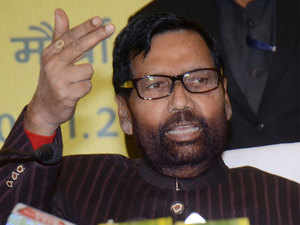 NEW DELHI: Food and consumer affairs minister Ram Vilas Paswan has asked states to ensure free distribution to poor people, earmarked under the PM Garib Kalyan Ann Yojana (PMGKAY), which entitles 810 million poor people for a monthly allocation of 5 kg of wheat or rice free of cost for three months over and above their regular monthly quota of 5 kg food grains at subsidised prices.

The government provides wheat for Rs 2 a kg and rice for Rs 3 a kg under National Food Security Act which gives food cover to two-third of the population.

“State governments are requested to lift their quota of food grains from Food Corporation of India for free distribution of the 5 kg food grains to beneficiaries under PMGKAY. They should ensure that every beneficiary gets the benefit,” Paswan tweeted.

Food Corporation of India is continuously transporting food grains every day to various parts of the country to feed people affected from the lock down.

The states have also been allowed to lift food grains directly from FCI godowns to meet any requirements over and above NFSA allotment and additional allocation under PMGKAY.

Government directs taxmen to dispose off applications related to TDS, TCS for FY20 by April 27

What happens when small businesses can’t pay the rent