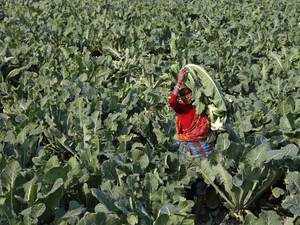 WorldIndiaConfirmed2,547Deaths62Confirmed1,013,157Deaths52,983New Delhi: Organised wholesalers such as Metro Cash & Carry and Walmart can procure directly from farmers instead of going through the yards of agricultural produce market committees during the Covid-19 lockdown.

While some states such as Karnataka, Maharashtra and West Bengal already allow cash and carry retailers to buy directly from farmers under the model Agricultural Produce Market Committee (APMC) Act, several others such as Uttar Pradesh don’t permit this. In these states, retailers procure via the mandis.

The relaxation came after the industry players met an empowered group of secretaries on Thursday. Even though mandis are allowed to operate during the lockdown, several states have shut them making it difficult to procure essential commodities. It is also difficult to maintain social distancing at crowded APMC yards.

For Karnataka, Maharashtra, West Bengal and Telangana, the company follows a mixed model of procurement wherein a major percentage of the produce is sourced directly from its collection centres, he said. “For Andhra Pradesh, Punjab, Delhi, Gujarat, MP, Uttar Pradesh and Rajasthan, we directly source from the local wholesale markets. In some cases, for certain key items, basis the volume, we source from farmers directly,” he added.

View: Whichever way one counts it, bearing the economic cost will be a challenge