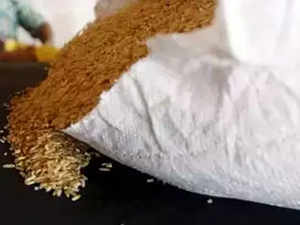 Flour millers, which produce essential food items like atta, maida and suji, have urged government to sell wheat throughout the country at a reasonable uniform price. NEW DELHI: Food Corporation of India (FCI), the central agency which buys and stocks rice and wheat for government, has extended its open market sale scheme (OMSS), slated to end this month, till further orders to continue its supply to bulk consumers like flour millers, who are staring closure due to supply crunch.

The FCI also opened its depots for selling grains to millers though state governments, which has curtailed the week-long e-auction process and ease the supply when millers are apprehending a large supply disruption leading to ‘out of stock’ situation in grocery shops over next couple of days.

“Millers can apply through district magistrates and then may lift wheat from nearest depot on production of authorisation letter from them. This will help millers to resolve logistic problems during lockdown,” said an FCI official.

Flour millers, which produce essential food items like atta, maida and suji, have urged government to sell wheat throughout the country at a reasonable uniform price.

“During harvest season, we can get wheat easily at less than Rs 18,000 a tonne from farmers. But due to lockdown, there is no arrival and mandis are closed. We have asked government to sell wheat at a reasonable price so that we can further sell flour at economical price to public during crisis,” said Navneet Chitlangia, secretary, Roller Flour Millers Federation of India (RFMFI).

“Pricing can be decided by government only. FCI has not role in fixing the price,” the FCI official said.

Chitlangia said that 1200 out of 2000 mills associated with us have already been shut due to shortage of grains in the market, which may trigger a panic situation if supply is not restored.

“We are now left with just 2-3 days of stock. If situation doesn’t improve, remaining mills will also shut down. We used to supply 5 lakh tonnes of processed wheat items every day. Now the production has been cut to 1.6 lakh tonne a day,” he said.

The crisis surfaced because ahead of fresh harvesting season in April, millers keep just 15 days rolling stock during March. Reports of a bumper wheat crop have softened the prices of wheat and they were expecting to get the fresh harvest at less than Rs 18000 a tonne.

“But due to lockdown, mandis are closed in Rajasthan, Punjab, Haryana, Madhya Pradesh and Gujarat. Unless government allows FCI to meet the grains demand of millers at reasonable price, there could be disruption in availability of atta, maida and suji,” said Chitlangia.

The flour milling industry gets one-third of their annual wheat requirement of 22-23 million tonne from FCI under OMSS. The demand for FCI’s grains is the highest during January-March quarter.

Assam to set up 100 Farmers’ Producers Company for ramping up…